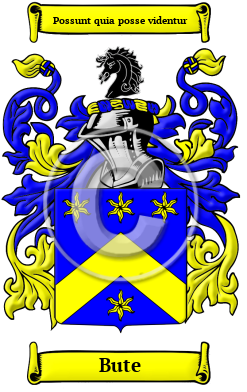 The ancient name Bute is a Norman name that would have been developed in England after the Norman Conquest of England in 1066. This name was a name given to a nickname for the Middle English word butt meaning "thicker end" or "stump," in other words a name for a thickset person. Alternatively the name could have been derived from the Middle English word "butt" or the Old French word "but" which both meant a target or mark for archery. In this latter case, the name would be ascribed to one who lived near archery butts or perhaps an archer. [1]

Saint Buite (d. 521), was the son of Bronach, and was descended from Tadhg, son of Cian, and therefore belonged to the Cianachta. "Buite, with sixty companions, set out for the country of the Picts of Scotland. Here King Nectan, whom he is reported to have raised from the dead, bestowed on him the castrum or fort in which he lived, and the memory of the gift is perpetuated in the name of the place Carbuddo (Cathair-Buiti), near Dun-Nechtain, now Dunnichen, in Forfar. Crossing over Scotland, he reached the Irish Sea, and embarking arrived at Dalriada, in the north of the county of Antrim, the territory of the Cruithni, or Picts of Ireland, of the same race as those among whom he had been labouring. Here having, we are told, raised the king's daughter from the dead, he received a gift of land, on which he built a church." [2]

Early Origins of the Bute family

Much further to the north, the Isle of Bute is in the county of Bute, in the Frith of Clyde. [5]

Early History of the Bute family

Before the last few hundred years the English language had no fixed system of spelling rules. For that reason, spelling variations occurred commonly in Anglo Norman surnames. Over the years, many variations of the name Bute were recorded, including Butt, But, Butte and others.

Outstanding amongst the family at this time was Sir William Butts (c.1486-1545), a member of King Henry VIII of England's court who served as the King's physician. Robert Butts (1684-1748), was bishop successively of Norwich 1733-1738, and of Ely 1738-1748...
Another 39 words (3 lines of text) are included under the topic Early Bute Notables in all our PDF Extended History products and printed products wherever possible.

Migration of the Bute family to Ireland

Some of the Bute family moved to Ireland, but this topic is not covered in this excerpt.
Another 62 words (4 lines of text) about their life in Ireland is included in all our PDF Extended History products and printed products wherever possible.

Bute migration to the United States +

The unstable environment in England at this time caused numerous families to board ships and leave in search of opportunity and freedom from persecution abroad in places like Ireland, Australia, and particularly the New World. The voyage was extremely difficult, however, and only taken at great expense. The cramped conditions and unsanitary nature of the vessels caused many to arrive diseased and starving, not to mention destitute from the enormous cost. Still opportunity in the emerging nations of Canada and the United States was far greater than at home and many went on to make important contributions to the cultures of their adopted countries. An examination of many early immigration records reveals that people bearing the name Bute arrived in North America very early:

Bute Settlers in United States in the 17th Century

Bute Settlers in United States in the 19th Century

Motto: Possunt quia posse videntur
Motto Translation: They conquer who believe they can