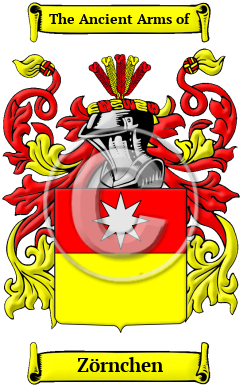 Early Origins of the Zörnchen family

The surname Zörnchen was first found in Alsace, where this family name, belonging to one of the oldest, most prestigious, and most widespread ruling families of the region, was a prominent contributor to the development of the district since ancient times. Always prominent in social affairs, the name became an integral part of that turbulent area as it emerged to form alliances with other families within the Feudal System and the nation. Chronicles record at least thirty different variations on the Family Crest born by the many prominent branches of this family. The main branches had their ancestral seat at the estates Osthausen, Ehrstein, and Gerstheim, and members ruled the city Strasbourg from early on.

Early History of the Zörnchen family

This web page shows only a small excerpt of our Zörnchen research. Another 178 words (13 lines of text) covering the years 1252, 1262, 1613, 1870 and 1821 are included under the topic Early Zörnchen History in all our PDF Extended History products and printed products wherever possible.

Another 32 words (2 lines of text) are included under the topic Early Zörnchen Notables in all our PDF Extended History products and printed products wherever possible.

Migration of the Zörnchen family