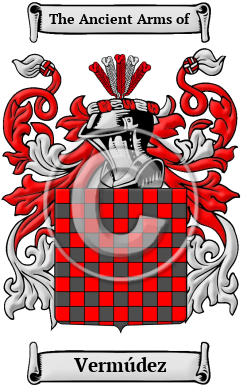 Early Origins of the Vermúdez family

The surname Vermúdez was first found in Galicia, where the Celts and the Swabians, a Germanic tribe, had settled.

Early History of the Vermúdez family

This web page shows only a small excerpt of our Vermúdez research. Another 110 words (8 lines of text) covering the years 1045 and 1537 are included under the topic Early Vermúdez History in all our PDF Extended History products and printed products wherever possible.

Prominent among members of the family twelfth century nobleman Garci Bermúdez of Toledo; Pedro Bermúdez de Trejo, fifteenth century soldier of the Reconquest; Bartolomé Bermúdez, knighted by King Charles...
Another 28 words (2 lines of text) are included under the topic Early Vermúdez Notables in all our PDF Extended History products and printed products wherever possible.

Migration of the Vermúdez family

Some of the first settlers of this family name or some of its variants were: Juan Bermúdez, who named the islands of Bermuda when he claimed them for Spain after being shipwrecked there in 1522. Also of note was Antonio Bermú.