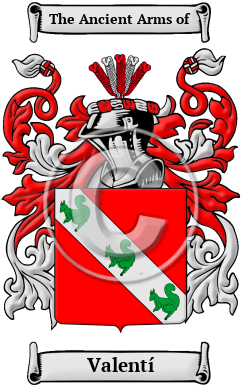 Early Origins of the Valentí family

The surname Valentí was first found in Vicenza, anciently known as Vicetia, a town in Venetia, capital of the province of Vicenza. It was conquered by the Venetians in 1405. It has many beautiful palaces and churches, galleries and museums. The cathedral is Gothic. The original church SS.Felice e Fortunato was built in 975 but has been much altered. It is notable for its development painters, architects, sculptors and scholars. Natives were Trissino, Palladio, Pigafetta, Fogazzaro, Mantegna, Montagna, Speranza, Scamozzi and Buoncosiglio. In those ancient times only persons of rank, the podesta, clergy, city officials, army officers, artists, landowners were entered into the records. To be recorded at this time, at the beginning of recorded history, was of itself a great distinction and indicative of noble ancestry. The name is first mentioned in the year 1200 in Vicenza.

Early History of the Valentí family

This web page shows only a small excerpt of our Valentí research. Another 98 words (7 lines of text) covering the year 1820 is included under the topic Early Valentí History in all our PDF Extended History products and printed products wherever possible.

More information is included under the topic Early Valentí Notables in all our PDF Extended History products and printed products wherever possible.

Valentí migration to the United States +

Valentí Settlers in United States in the 19th Century

Valentí Settlers in United States in the 20th Century