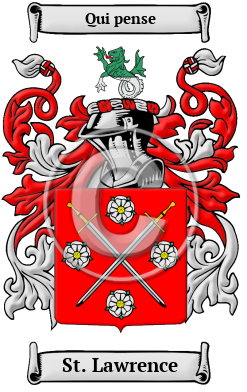 The surname St. Lawrence is derived from the Old English personal names Lorens and Laurence, which were derived from the Latin name Laurentius. This name referred to a man from Laurentum, a town in Italy that was probably named for its laurels or bay trees. St. Lawrence, who was born in Huesca in Spain, became a deacon of Rome and was martyred in 258 AD, during the persecution of Valerianus. He gained a large following throughout Europe.

The surname St. Lawrence was first found in County Clare (Irish: An Clár) located on the west coast of Ireland in the province of Munster, where the family have been seated since the year 1177 having been granted their original lands by Strongbow, Earl of Pembroke, for the family's distinguished assistance in the invasion of Ireland in the year 1172.

Migration of the St. Lawrence family to Ireland

Some of the St. Lawrence family moved to Ireland, but this topic is not covered in this excerpt.
Another 167 words (12 lines of text) about their life in Ireland is included in all our PDF Extended History products and printed products wherever possible.

A great number of Irish families left their homeland in the late 18th century and throughout the 19th century, migrating to such far away lands as Australia and North America. The early settlers left after much planning and deliberation. They were generally well off but they desired a tract of land that they could farm solely for themselves. The great mass of immigrants to arrive on North American shores in the 1840s differed greatly from their predecessors because many of them were utterly destitute, selling all they had to gain a passage on a ship or having their way paid by a philanthropic society. These Irish people were trying to escape the aftermath of the Great Potato Famine: poverty, starvation, disease, and, for many, ultimately death. Those that arrived on North American shores were not warmly welcomed by the established population, but they were vital to the rapid development of the industry, agriculture, and infrastructure of the infant nations of the United States and what would become Canada. Early passenger and immigration lists reveal many Irish settlers bearing the name St. Lawrence:

St. Lawrence Settlers in United States in the 18th Century

St. Lawrence Settlers in Australia in the 19th Century