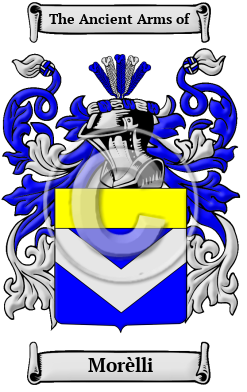 The origins of the Morèlli name are uncertain, but most scholars seems to agree that the name likely comes from the Latin term "maurus," used to describe either a Moor, or anyone of a markedly dark complexion. There have also been place names such as Morella, a town in the Spanish province of Casteldon de la Plana, and Morelli, Calabria, and the Morèlli surname may have been taken on from the name of the place whence its original bearer hailed. This name can be found in forms with the typical Italian surname endings of "i" and "o," the former being characteristic of northern Italy, the latter, more typical in the South.

Early Origins of the Morèlli family

The surname Morèlli was first found in Florence (Italian: Firenze), where a family of this name has resided since the 14th century.

Early History of the Morèlli family

In comparison with other European surnames, Italian surnames have a surprising number of forms. They reflect the regional variations and the many dialects of the Italian language, each with its own distinctive features. For example, in Northern Italy the typical Italian surname suffix is "i", whereas in Southern Italy it is "o". Additionally, spelling changes frequently occurred because medieval scribes and church officials often spelled names as they sounded rather than according to any specific spelling rules. The spelling variations in the name Morèlli include Morelli, Morèlli, Morello, Morèllo, Morella and many more.

Prominent among members of the family was Lazzaro Morelli (1608-1690), an Italian sculptor of the Baroque period; Ferdinando Morello of the Morello di Caltanissetta e di Messina family, who acquired the barony of Trabonello in 1747; James Morelli (1745-1819), an...
Another 39 words (3 lines of text) are included under the topic Early Morèlli Notables in all our PDF Extended History products and printed products wherever possible.

Morèlli migration to the United States +

Discovered in the immigration and passenger lists were a number of people bearing the name Morèlli:

Morèlli Settlers in United States in the 19th Century

Morèlli Settlers in United States in the 20th Century

Historic Events for the Morèlli family +