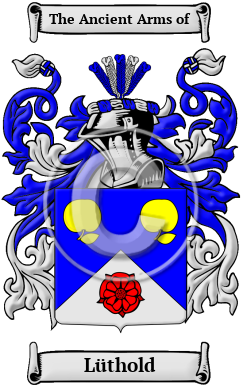 Early Origins of the Lüthold family

The surname Lüthold was first found in Saxony, where the name emerged in mediaeval times as one of the notable families of the region. In northern Germany the name Lueder was more popular, while in southern Germany the root was Liut-her or Leuther, and in Thuringia "Luther" (Martin Luther's father wrote his name "Luder"). In mediaeval German "lud" meant "fame" and "liut" meant "Leute" ("people" or "folk," thus "liut-her" would be "Lord of the people",) and these are the two possible sources for the name. From the 13th century the surname was identified with the great social and economic evolution which made this territory a landmark contributor to the development of the nation.

Early History of the Lüthold family

Prominent bearers of the family name Lüthold at this time were Peter Luder (1415-1472), German professor of Latin at the University of Heidelberg from 1456; and Martin Luther (1483-1546), who was the dominating personality of the Reformation, and one of the greatest religious reformers the world has known. His greatest literary monument amongst...
Another 52 words (4 lines of text) are included under the topic Early Lüthold Notables in all our PDF Extended History products and printed products wherever possible.

Migration of the Lüthold family

Some of the first settlers of this family name or some of its variants were: Caspar Luther, who came to America in 1720. Christian Luther came to Philadelphia in 1751; Ludwig Luther came in 1753; Engelbert Luther came to Texas in 1846.