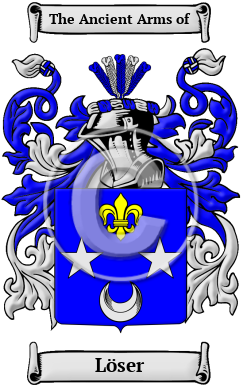 The colorful history of Saxony provides a glimpse at the oldest origins of the Löser family. In the medieval era, the German lands were inhabited by a variety of Barbarian tribes. The ancient dukedom of Saxony derived its name from the Germanic tribe name the Saxons who inhabited the territory after the fall of the Roman Empire.

Early Origins of the Löser family

The surname Löser was first found in Saxony, where the name was anciently associated with the tribal conflicts of the area. They declared allegiances to many nobles and princes of early history, lending their influence in struggles for power and status within the region. The oldest form of the name is Loeser or Lesar, which stems from Lazarus and the Hebrew names Eleazer and Elieser.

Today Lieser, Germany is a municipality belonging to a Verbandsgemeinde, in the Bernkastel-Wittlich district in Rhineland-Palatinate, Germany.

Schloss Lieser (Castle of Lieser) in the Mosel valley is one of the most striking buildings within the village of Lieser, Germany. It was built on the site of a 1710-built church property in the 1800s for the family of the winery owner Eduard Puricelli. And Lieser is a small river in Rhineland-Palatinate, Germany, a left tributary of the Moselle.

Early History of the Löser family

This web page shows only a small excerpt of our Löser research. Another 141 words (10 lines of text) covering the years 1745, 1325 and 1876 are included under the topic Early Löser History in all our PDF Extended History products and printed products wherever possible.

Prominent bearers of the family name Löser at this time were Matthia Loeser (15th century), who was not only provost of Klemberg and the Chancellor of Saxony, but was an important...
Another 31 words (2 lines of text) are included under the topic Early Löser Notables in all our PDF Extended History products and printed products wherever possible.

Löser migration to the United States +

Löser Settlers in United States in the 18th Century

Löser Settlers in United States in the 19th Century

Löser Settlers in United States in the 20th Century

Historic Events for the Löser family +