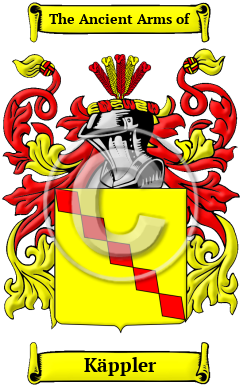 The name Käppler, which is a local surname, reveals that the original bearer of the name once lived, held land, or was born in the beautiful region of Bohemia, which is now part of Czechoslovakia.The name Bohemia comes from the tribe of the Boii, who were settled in this ancient territory. In the 10th century, the ruling Bohemian dukes became Reichsfuersten, or Princes of the German Empire. In 1198, they were crowned Kings of Bohemia and they became subjects and Electors of the Kaiser. In the early 14th century, Prague became the capital of the Empire.

Early Origins of the Käppler family

The surname Käppler was first found in Bohemia, where the name was an integral part of the feudal society which would shape modern European history. Individual bearers of the name first mentioned in ancient chronicles include Henrich Keppler (c.1365) and Hensel Kepel (c.1382,) both of Prague.

Early History of the Käppler family

This web page shows only a small excerpt of our Käppler research. Another 189 words (14 lines of text) covering the years 1579, 1718, 1733, 1571 and 1630 are included under the topic Early Käppler History in all our PDF Extended History products and printed products wherever possible.

More information is included under the topic Early Käppler Notables in all our PDF Extended History products and printed products wherever possible.

Käppler migration to the United States +

Käppler Settlers in United States in the 18th Century

Käppler Settlers in United States in the 19th Century

Käppler Settlers in Australia in the 19th Century