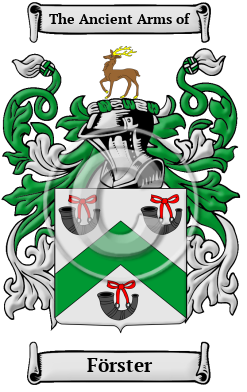 The Förster surname was no doubt taken on by someone who either lived in or near a forest, or perhaps worked in the forest. The Middle English word "forest" referred specifically to an area of woodland reserved by law as hunting grounds for the king or his nobles. No doubt, as a surname, Förster would have appeared independently in various parts of Britain. Alternately, some instances of this surname are thought to derive from the Old French (Norman) word "forcetier," which was originally an occupational name for a maker or user of scissors or clipping shears.

Early Origins of the Förster family

The surname Förster was first found in Northumberland where early records include John Forester, listed in the Pipe Rolls of Surrey of 1183, Warin le Forstere in London in 1199, and Richard le Forester listed in the Feet of Fines of Essex in 1240. There was a line of Forsters who held Bamborough Castle, Northumberland, beginning with Sir John Forster, said to have fought with King Richard I in the Crusades of the 12th century; Governing the castle until the mid 18th century. There was also a Shropshire family of this name, who held custody of part of the Wrekin forest. An early record of this family lists a Hugh Forester as a witness 1187. Adderstone in Northumberland was another ancient family seat. "The manor [of Adderstone] was possessed by the ancient family of Forster, from whom it came, in 1763, to John William Bacon, Esq." [1] And another branch of the family was found at Beadnell, again in Northumberland. "Here is a small castle, which formerly belonged to the family of Forster; and close to the sea are remains of a chapel, supposed to have been a cell to Coldingham monastery." [1]

Early History of the Förster family

Although the name, Förster, appeared in many references, from time to time, the surname was shown with the spellings Forrester, Forester, Forrest, Forster, Foster, Forrestor, Forrister, Fewster, Foister, Foyster and many more.

Notable amongst the family name during their early history was Sir John Forster (c.1515-1602), English administrator and soldier; Sir William Forster; and his son, Sir Humfrey Forester, 1st Baronet (died 1663) of Aldermaston, Berkshire, Sheriff of Berkshire (1619-1620); and his son, Sir Humphrey Forster, 2nd Baronet (c 1649-1711), an English politician, Member of Parliament for Berkshire in 1677, Sheriff of Berkshire in 1704. Sir Humphrey's second son, William Forster...
Another 68 words (5 lines of text) are included under the topic Early Förster Notables in all our PDF Extended History products and printed products wherever possible.

Migration of the Förster family to Ireland

Some of the Förster family moved to Ireland, but this topic is not covered in this excerpt.
Another 79 words (6 lines of text) about their life in Ireland is included in all our PDF Extended History products and printed products wherever possible.

Förster migration to the United States +

Gradually becoming disenchanted with life in Ireland many of these uprooted families sailed aboard the armada of sailing ships known as the "White Sails" which plied the stormy Atlantic. These overcrowded ships often arrived with only 60 to 70% of their original passenger list, many dying of cholera, typhoid, dysentery or small pox. In North America, some of the first immigrants who could be considered kinsmen of the Förster family name Förster, or who bore a variation of the surname were

Förster Settlers in United States in the 17th Century

Förster Settlers in United States in the 18th Century

Förster Settlers in United States in the 19th Century

Förster Settlers in United States in the 20th Century

Förster Settlers in Canada in the 18th Century

Förster Settlers in Canada in the 19th Century

Förster Settlers in Australia in the 19th Century

Förster Settlers in New Zealand in the 19th Century

Historic Events for the Förster family +