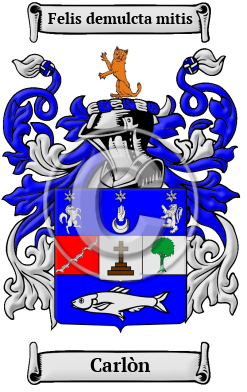 The Irish name Carlòn claims descent from the O'Connors in Donegal where "Carlan" (from the Irish "carla" meaning a "wool-comb" and "an" meaning "one who" which roughly translates as "one who combs wool") was in Irish O'Carlain or O'Caireallain.

Early Origins of the Carlòn family

The surname Carlòn was first found in County Limerick (Irish: Luimneach) located in Southwestern Ireland, in the province of Munster, where the name is descended from the O'Connor stem, Kings of Connaught and the family became early associated with the county of Tyrone, and in neighboring counties.

Early History of the Carlòn family

A name was often recorded during the Middle Ages under several different spelling variations during the life of its bearer because literacy was rare there was no real push to clearly define any of the languages found in the British Isles at that time. Variations found of the name Carlòn include Carlin, Carling, O'Carolan, Carline, Karlin, Kerling, Kerline, Carlind, Carlynde, Carlyne, Carlyn, Carrlin, Carrling, Kerlynd, Kerlynde, Karlynd, Karline, Kearlin, Kearline, Kearlynd, Carolan, Carrolan, Carolyn, Carolyne, Caroline, Carolynde, Caraline, Carroline, Carlan, Carland, Carlon, Carlone, Karolin, Karolan, Karrolin and many more.

Notable amongst the family name at this time was Hugh O'Carolan, Bishop of Clogher from 1535-1568. Turlough O'Carolan (1670-1738) was a blind early Irish harper, composer and singer, known for his gift for melodic composition. Born in Nobber, County Meath, his father took a job with the MacDermott Roe family of Alderford House, thereby giving Turlough an education. By the time he was eighteen, he was blinded by smallpox and by the age of twenty-one, he was given a horse and...
Another 81 words (6 lines of text) are included under the topic Early Carlòn Notables in all our PDF Extended History products and printed products wherever possible.

Carlòn migration to the United States +

Ireland became inhospitable for many native Irish families in the 19th centuries. Poverty, lack of opportunities, high rents, and discrimination forced thousands to leave the island for North America. The largest exodus of Irish settlers occurred with the Great Potato Famine of the late 1840s. For these immigrants the journey to British North America and the United States was long and dangerous and many did not live to see the shores of those new lands. Those who did make it were essential to the development of what would become two of the wealthiest and most powerful nations of the world. These Irish immigrants were not only important for peopling the new settlements and cities, they also provided the manpower needed for the many industrial and agricultural projects so essential to these growing nations. Immigration and passenger lists have documented the arrival of various people bearing the name Carlòn to North America:

Carlòn Settlers in United States in the 19th Century

Carlòn Settlers in Australia in the 18th Century