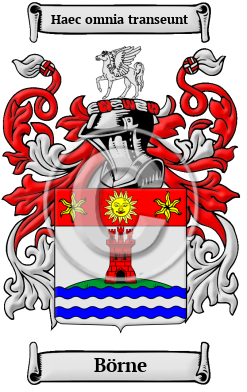 The Börne name has descended through the generations from the ancient Anglo-Saxon culture. Their name comes from having lived at or near a local stream or a spring. Bourn is a small village and civil parish in South Cambridgeshire. The population of the parish was 1,764 people at the time of the 2001 census.

Bourn Castle was located there and originally consisted of wooden buildings on an earthwork enclosure which was erected during the reign of William the Conqueror. This was burnt down during the reign of Henry III. In the early 16th century Bourn Hall was built on part of the site.

Early Origins of the Börne family

The surname Börne was first found in Lincolnshire at Bourne, a market town and civil parish in the South Kesteven district which dates back to the Domesday Book where it was listed as Brune. The place name was derived from the Old English word burna or perhaps the Old Scandinavian word brunnr.

The aforementioned Bourn in South Cambridgeshire also dates back to the Domesday Book where it was listed at that time as Brune. It has a similar origin. [1]

Bourne Abbey is in Bourne, Lincolnshire dates back to before Domesday Book in 1086. At that time, it was listed as "half a church" and had a priest. In other words, it was a small church but standards of those days. Bourne Abbey and the surrounding area was held by Ogier the Breton and was a major fishery holding at the time 2,500 eels. [2]

Early History of the Börne family

Notables of the family at this time include William Bourne or Bourn; (d. 1583), English mathematician, son of William Bourne of Gravesend, who died 1560; Immanuel Bourne (1590-1679), English divine from East Haddon, Northamptonshire; and Nehemiah Bourne (c. 1611-1690), an English Royal Navy Admiral who emigrated to America after the Restoration, retiring his appointment. Samuel Bourn, the Elder (1648-1719), was an English dissenting minister, born in 1648 at Derby, where his father and grandfather, who were clothiers, had shown some public spirit in providing the town with...
Another 86 words (6 lines of text) are included under the topic Early Börne Notables in all our PDF Extended History products and printed products wherever possible.

Migration of the Börne family to Ireland

Some of the Börne family moved to Ireland, but this topic is not covered in this excerpt.
Another 43 words (3 lines of text) about their life in Ireland is included in all our PDF Extended History products and printed products wherever possible.

Börne migration to the United States +

To escape the unstable social climate in England of this time, many families boarded ships for the New World with the hope of finding land, opportunity, and greater religious and political freedom. Although the voyages were expensive, crowded, and difficult, those families that arrived often found greater opportunities and freedoms than they could have experienced at home. Many of those families went on to make significant contributions to the rapidly developing colonies in which they settled. Early North American records indicate many people bearing the name Börne were among those contributors:

Börne Settlers in United States in the 17th Century

Börne Settlers in United States in the 18th Century

Börne Settlers in United States in the 19th Century

Börne Settlers in Australia in the 19th Century

Börne Settlers in West Indies in the 17th Century