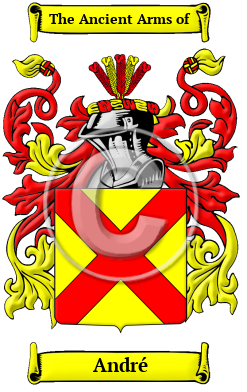 Early Origins of the André family

The surname André was first found in Provence, where the family has held a family seat since ancient times.

During the Middle Ages several members of the family distinguished themselves through their contribution to the community in which they lived, and they were rewarded accordingly, thus rendering the name more illustrious. Several provinces claim to have been the seat of these great noble families, such as, Provence, Languedoc, Brittany, as well as, Lorraine, Auvergne, Normandy, Périgord, Dauphiné, and the City of Paris, to list a few.

Some of these families have a seat in two different provinces such as the André de Villerin, of Brittany and Provence, and the barons André of Dauphiné and Brittany. Some also trace the name to a small village called Andrest, in the Hautes Pyrénées. [1] There was also a "Seigneurie", or Lordship, of the same name created for the family of De Varignières, in the province of Normandy in 1463.

Early History of the André family

This web page shows only a small excerpt of our André research. Another 111 words (8 lines of text) covering the year 1463 is included under the topic Early André History in all our PDF Extended History products and printed products wherever possible.

Notable amongst the names at this time was Bernard André or Andreas ( fl. 1500), a French-born, poet and historian. He was a Frenchman by birth, being a native of Toulouse, but came to England together with, or shortly before, Henry VII, whose poet laureate and historiographer he became. "Nothing is known of his family, though he is described by a contemporary as of distinguished birth; nor can we even guess the date at which he was born, except vaguely from the fact that in 1521 he describes himself as having attained extreme old age. He was probably introduced to the notice...
Another 137 words (10 lines of text) are included under the topic Early André Notables in all our PDF Extended History products and printed products wherever possible.

André migration to the United States +

André Settlers in United States in the 18th Century

André Settlers in United States in the 19th Century

André Settlers in Canada in the 17th Century

André Settlers in Canada in the 19th Century