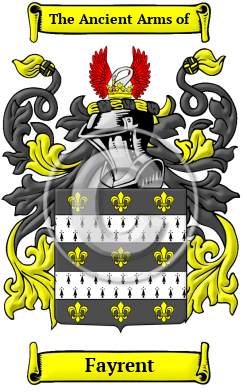 The name Fayrent originated with the Anglo-Saxon tribes that once ruled Britain. It is derived from the given name Farimond. The surname Fayrent originally derived from the Old French word Ferrant which meant iron-grey. The surname Fayrent was later adopted in England after the Norman Conquest of 1066. In Old English, patronyms were formed by adding a variety of suffixes to personal names, which changed over time and from place to place. For example, after the Norman Conquest, sunu and sune, which meant son, were the most common patronymic suffixes. In the 12th and 13th centuries, the most common patronymic names included the word filius, which meant son. By the 14th century, the suffix son had replaced these earlier versions. Surnames that were formed with filius or son were more common in the north of England and it was here that the number of individuals without surnames was greatest at this time.

Early Origins of the Fayrent family

The surname Fayrent was first found in the eastern counties of Norfolk, Cambridge and Oxfordshire and it is from this latter shire that we found the first record of the name: Henry Ferant who was listed in the Hundredorum Rolls of 1273. Walter Ferrant was listed in the same census but was found in Cambridgeshire. Finally, the same source lists Benedict Feraunt in Norfolk. [1]

Early History of the Fayrent family

One relatively recent invention that did much to standardize English spelling was the printing press. However, before its invention even the most literate people recorded their names according to sound rather than spelling. The spelling variations under which the name Fayrent has appeared include Farrant, Farrand, Farrin, Farrent, Farren and others.

Notables of this surname at this time include: Richard Farrant (c. 1530-1580), English composer of church music, choirmaster, playwright and theatrical producer who created the Blackfriars Theatre. The date of his first appointment is not known, but he resigned in April, 1564, on becoming Master of the Children of St. George's Chapel, Windsor, of which he is said to have been also a lay vicar and organist. During his tenure of office at Windsor he occupied 'a dwelling house within the Castle, called the Old Commons.'...
Another 86 words (6 lines of text) are included under the topic Early Fayrent Notables in all our PDF Extended History products and printed products wherever possible.

Migration of the Fayrent family to Ireland

Some of the Fayrent family moved to Ireland, but this topic is not covered in this excerpt.
Another 76 words (5 lines of text) about their life in Ireland is included in all our PDF Extended History products and printed products wherever possible.

Migration of the Fayrent family

At this time, the shores of the New World beckoned many English families that felt that the social climate in England was oppressive and lacked opportunity for change. Thousands left England at great expense in ships that were overcrowded and full of disease. A great portion of these settlers never survived the journey and even a greater number arrived sick, starving, and without a penny. The survivors, however, were often greeted with greater opportunity than they could have experienced back home. These English settlers made significant contributions to those colonies that would eventually become the United States and Canada. An examination of early immigration records and passenger ship lists revealed that people bearing the name Fayrent arrived in North America very early: Edward Farrand, who arrived in Philadelphia in 1853; and John Farrant, who arrived in Philadelphia in 1864.