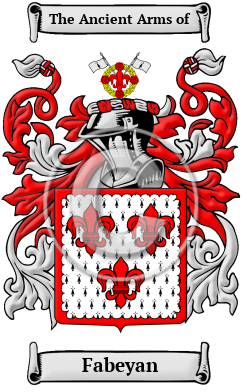 Early Origins of the Fabeyan family

The surname Fabeyan was first found in Hampshire where they held a family seat in the year 1184. Fabianus of Cam held estates in that shire at that time. [1] The name has two possible origins: from the ancient personal name, the Latin Fabianus; [2] and from the Latin Fabius, Faba, a bean-the bean-man, so called from his success in cultivating beans. [3]

Early History of the Fabeyan family

Spelling variations in names were a common occurrence before English spelling was standardized a few hundred years ago. In the Middle Ages, even the literate spelled their names differently as the English language incorporated elements of French, Latin, and other European languages. Many variations of the name Fabeyan have been found, including Fabian, Fabyan, Fabien, Fabyn, Fabyen and others.

Distinguished members of the family include Robert Fabyan (died c.1512), a London draper, Sheriff and Alderman, and author of Fabyan's Chronicle. He "came of a respectable family in Essex. We gather from his will that his father's name was John, and his mother's Agnes. It would seem that he followed his father as a clothier in London, where he became a member of the Draper's Company and alderman of the ward of Farringdon Without. In 1493 he held the office of sheriff, and in 1496 was one of a committee appointed to lay before Henry VII the grievances of the London...
Another 101 words (7 lines of text) are included under the topic Early Fabeyan Notables in all our PDF Extended History products and printed products wherever possible.

Migration of the Fabeyan family

Families began migrating abroad in enormous numbers because of the political and religious discontent in England. Often faced with persecution and starvation in England, the possibilities of the New World attracted many English people. Although the ocean trips took many lives, those who did get to North America were instrumental in building the necessary groundwork for what would become for new powerful nations. Some of the first immigrants to cross the Atlantic and come to North America bore the name Fabeyan, or a variant listed above: Simon Fabian who arrived in Virginia in 1668; MIchel Fabian who settled in Pennsylvania in 1751; John Fabian who arrived in New Orleans in 1857; Christoph Fabian who arrived in New York city in 1862.