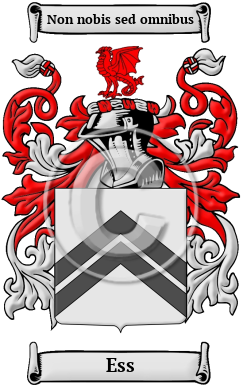 Ess is a name of ancient Norman origin. It arrived in England with the Norman Conquest of 1066. The Ess family lived in close proximity to an ash tree. As such, the name has local references to towns called Ash in Derbyshire, Surrey, Hampshire, and many other places.

Early Origins of the Ess family

The surname Ess was first found in the county of Devon in southern England. The first person to settle in the locality was D'Esse Court, a companion of King William, Duke of Normandy who landed in England in 1066 A.D. and was granted lands by his liege lord in the vicinity of Exeter, Devon.

Alternatively the family could have originated in Esh or Ash, a chapelry, in the parish and union of Lanchester in Durham. "The manor gave name, at a very early period, to a family of considerable local consequence, who held the estate, with little interruption, from the middle of the 13th century till the time of Henry VIII." [1]

The Yorkshire Poll Tax Rolls of 1379 had only one listing of the family, Robertus del Asch. [2]

Another source notes: "There are places so called in Derbyshire, Surrey, Hampshire, and elsewhere. It seems probable, however, that the name was sometimes adopted from residence near a remarkable ash tree. We find the Atten-Ashe of the XIV. cent. contracted into Nashe soon after." [4]

Early History of the Ess family

Endless spelling variations are a prevailing characteristic of Norman surnames. Old and Middle English lacked any definite spelling rules, and the introduction of Norman French added an unfamiliar ingredient to the English linguistic stew. French and Latin, the languages of the court, also influenced spellings. Finally, Medieval scribes generally spelled words according to how they sounded, so one person was often referred to by different spellings in different documents. The name has been spelled Esse, Ash, Ashe, Aschey and others.

Outstanding amongst the family at this time was John Ashe (1597-1658), an English clothier and politician for Westbury and later for Somerset at various times between 1640 and 1656, upon his death he left a landed estate valued at £6000 a year; Edward Ashe (ca.1609-1656), brother of...
Another 47 words (3 lines of text) are included under the topic Early Ess Notables in all our PDF Extended History products and printed products wherever possible.

Migration of the Ess family to Ireland

Some of the Ess family moved to Ireland, but this topic is not covered in this excerpt.
Another 132 words (9 lines of text) about their life in Ireland is included in all our PDF Extended History products and printed products wherever possible.

Ess migration to the United States +

To escape the political and religious persecution within England at the time, many English families left for the various British colonies abroad. The voyage was extremely difficult, though, and the cramped, dank ships caused many to arrive in the New World diseased and starving. But for those who made it, the trip was most often worth it. Many of the families who arrived went on to make valuable contributions to the emerging nations of Canada and the United States. An inquiry into the early roots of North American families reveals a number of immigrants bearing the name Ess or a variant listed above:

Ess Settlers in United States in the 18th Century

Motto: Non nobis sed omnibus
Motto Translation: Not for us but for all.