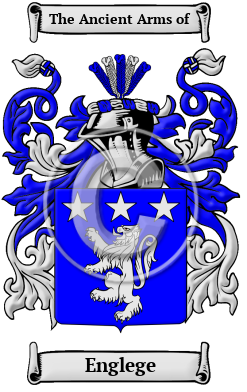 The earliest origins of the Englege surname date from the ancient Anglo-Saxon culture of Britain. Their name reveals that an early member was a Englishman, so nicknamed for a person from England. The name Englege comes from the Old English word "Englisc," originally used to describe the Angles as distinct from the Saxons. One document in referrring to a raid in 1541, mentions the attacking party were 'to the number of fifty-two Inglimen. The name was probably used to refer to "Non Welsh" in the border counties in that region, "Non-Celtic Scot" in the Scottish-England borderlands, and "Non-Dane" in the Danelaw regions.

Early Origins of the Englege family

The surname Englege was first found in Herefordshire where Gillebertus Anglicus was listed in the Pipe Rolls of 1171. [2] William le Englich was listed in Somerset, 1 Edward III (during the first year of the reign of King Edward III.) [3]

Early History of the Englege family

It is only in the last few hundred years that the English language has been standardized. For that reason, early Anglo-Saxon surnames like Englege are characterized by many spelling variations. As the English language changed and incorporated elements of other European languages, even literate people changed the spelling of their names. The variations of the name Englege include: Inglis, Inglish, Inglys, English, Englys and others.

Distinguished members of the family include Archibald Inglis (b. circa 1630), an ordained minister, who was Rector of Glasow University from 1686-1689; Sir James Inglis of Cramond, who was created a Baronet in...
Another 33 words (2 lines of text) are included under the topic Early Englege Notables in all our PDF Extended History products and printed products wherever possible.

Migration of the Englege family to Ireland

Some of the Englege family moved to Ireland, but this topic is not covered in this excerpt.
Another 74 words (5 lines of text) about their life in Ireland is included in all our PDF Extended History products and printed products wherever possible.

Migration of the Englege family

Many English families tired of political and religious strife left Britain for the new colonies in North America. Although the trip itself offered no relief - conditions on the ships were extremely cramped, and many travelers arrived diseased, starving, and destitute - these immigrants believed the opportunities that awaited them were worth the risks. Once in the colonies, many of the families did indeed prosper and, in turn, made significant contributions to the culture and economies of the growing colonies. An inquiry into the early roots of North American families has revealed a number of immigrants bearing the name Englege or a variant listed above: Mary Inglish, who settled in Barbados in 1635; George Inglis, who came to Maryland in 1664; Thomas Inglish, who settled in New York in 1775; James Inglis, who was banished to the colonies, arriving in Boston in 1652.