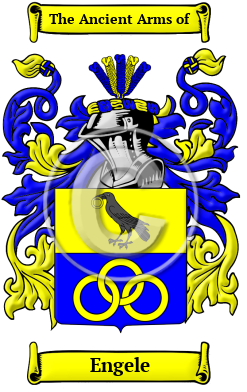 Early Origins of the Engele family

The surname Engele was first found in Bremen, where the name contributed greatly to the development of an emerging nation which would later play a large role in the tribal and national conflicts of the area. In later years the name branched into many houses, each playing a significant role in the local social and political affairs.

Early History of the Engele family

This web page shows only a small excerpt of our Engele research. Another 120 words (9 lines of text) covering the years 1772, 1630, 1674, 1669, 1694 and 1689 are included under the topic Early Engele History in all our PDF Extended History products and printed products wherever possible.

One can encounter great variation in the spelling of surnames: in early times, spelling in general, and thus the spelling of names was not yet standardized; and later, spellings would change with branching and movement of families. Variations of the name Engele include Engel, Engels, Engell, Engeler, Engeli, Aingel, Aingell, Aengel, Aengell, Aingeler, Engele, Aingele, Engler, Engebretson, Engelbrekt, Engelbretson, Engebrecht, Engelbrecht, Engelbrecher, Engelbert and many more.

Notables of the period with the name Engele were Hans Ludwig Engel (1630-1674), a Roman Catholic canon lawyer, best known as the author of "ollegium Universi Juris Canonici", Vice Chancellor at the University of Salzburg (1669); and Ludwig Engel (died 1694)...
Another 40 words (3 lines of text) are included under the topic Early Engele Notables in all our PDF Extended History products and printed products wherever possible.

Engele migration to the United States +

Engele Settlers in United States in the 19th Century

Engele Settlers in United States in the 20th Century