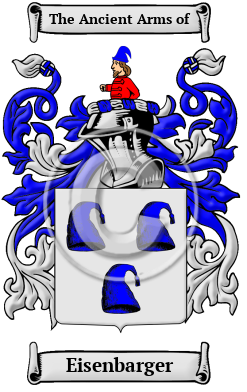 The Eisenbarger surname is a habitational name, taken on from any of the several places so named in Germany. The place names come from the Middle High German "isen," meaning "iron," and "berg," or "mountain."

Early Origins of the Eisenbarger family

The surname Eisenbarger was first found in Thuringia, where this family name became a prominent contributor to the development of the district from ancient times. Always prominent in social affairs, the family became an integral part of that turbulent region as it emerged to form alliances with other families within the Feudal System and the nation. The brothers Ottolf and Otto von Eisenburg lived in this region in the 13th century.

Early History of the Eisenbarger family

This web page shows only a small excerpt of our Eisenbarger research. Another 115 words (8 lines of text) covering the years 1774, 1774, 1663 and 1727 are included under the topic Early Eisenbarger History in all our PDF Extended History products and printed products wherever possible.

Notable members of the surname Eisenbarger in this period were Georg Ludwig Eisenberg, who was the Jaegermeister at Marienborn and Lord of the manor at Selbold. There was also a von Eisenberg family of Austria, who were raised to...
Another 39 words (3 lines of text) are included under the topic Early Eisenbarger Notables in all our PDF Extended History products and printed products wherever possible.

Migration of the Eisenbarger family