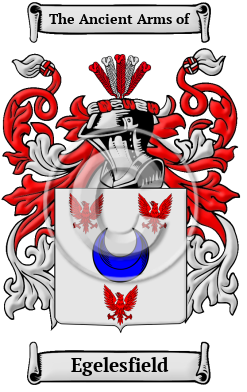 Early Origins of the Egelesfield family

The surname Egelesfield was first found in Cumberland, England where one of the first records of the family was Robert of Eglesfield (d. 1349), founder of the Queen's College, Oxford. He was the son of John of Eglesfield and Beatrice his wife, and grandson of Thomas of Eglesfield and Hawisia his wife. "He was presumably a native of Eaglesfield, near Cockermouth in Cumberland, and is said to have been a bachelor of divinity of Oxford." [1]

Early History of the Egelesfield family

This web page shows only a small excerpt of our Egelesfield research. Another 112 words (8 lines of text) covering the years 1307, 1518 and 1551 are included under the topic Early Egelesfield History in all our PDF Extended History products and printed products wherever possible.

Another 31 words (2 lines of text) are included under the topic Early Egelesfield Notables in all our PDF Extended History products and printed products wherever possible.

Migration of the Egelesfield family