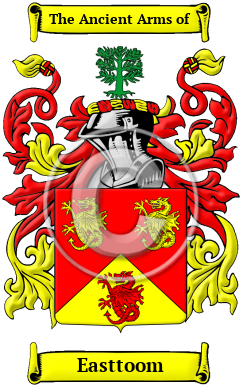 Early Origins of the Easttoom family

The surname Easttoom was first found in Norfolk where they held a family seat from very early times. The name was derived from the practice of the naming of the east "ton" or part of the village. It first appeared in the Domesday Book in Norfolk and Lincolnshire in the year 1086 A.D as Edstan and Estan. [2]

Early History of the Easttoom family

During the era when a person's name, tribe and posterity was one of his most important possessions, many different spellings were found in the archives examined. Easttoom occurred in many references, and spelling variations of the name found included Easton, Eastone, Eastown, Eastton, Eastoun, Eastowne, Easttone and many more.

Notable amongst the family name during their early history was Nicholas Easton (c. 1593-1675), English settler to the Massachusetts Bay Colony in 1634, an early colonial President and Governor of Rhode Island; John Easton (1624-1705), 15th Governor of the Colony of Rhode Island and Providence Plantations (1690-1695); and Charles Eyston (1667-1721), an English antiquary. Bernard Eyston (1628-1709), was a Franciscan friar, called in religion Bernard à Sancto Francisco, was a younger son of William Eyston, esq., of East Hendred, Berkshire. Charles Eyston (1667-1721), was an English antiquary, eldest son of George Eyston, esq., of East Hendred, Berkshire. [7] Peter Easton (c. 1570-1620?) was...
Another 101 words (7 lines of text) are included under the topic Early Easttoom Notables in all our PDF Extended History products and printed products wherever possible.

Migration of the Easttoom family

Gradually becoming disenchanted with life in Ireland many of these uprooted families sailed aboard the armada of sailing ships known as the "White Sails" which plied the stormy Atlantic. These overcrowded ships often arrived with only 60 to 70% of their original passenger list, many dying of illness and the elements, were buried at sea. In North America, early immigrants bearing the family name Easttoom, or a spelling variation of the surname include: Nicholas Easton who purchased land in New England in 1620; and William Easton who landed in Virginia in 1663; Mrs. Easton settled in Massachusetts in 1633.