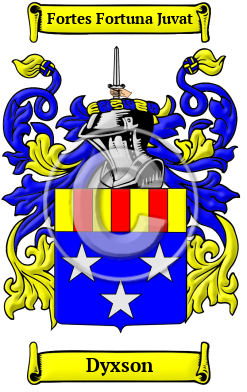 The ancestors of the first family to use the name Dyxson lived among the Pictish people of ancient Scotland. The name Dyxson is derived from son of Dick which is a derivative of the personal name Richard. [1]

Early Origins of the Dyxson family

The surname Dyxson was first found in Kirkcudbrightshire (Gaelic: Siorrachd Chille Chuithbheirt), part of the present day Council Area of Dumfries and Galloway, former county in Southwestern Scotland, where they held a family seat from early times. They were descended from the ancient Pictish Clan Keith, and the first Dickson was son of Richard Keith, son of the great Marischal of Scotland, who died in 1249, and Margaret daughter of the third Lord Douglas. Hence the Clan has always claimed to be followers of the Douglas Clan.

Early History of the Dyxson family

The arts of spelling and translation were yet in their infancies when surnames began, so there are an enormous number of spelling variations of the names in early Scottish records. This is a particular problem with Scottish names because of the numerous times a name might have been loosely translated to English from Gaelic and back. Dyxson has been spelled Dixon, Dickson, Dixoun, Dikson, Dyxson, Dyckson, Dicksoun, Dicson and many more.

Notable amongst the Clan at this time was David Dickson or Dick (1583-1663), Scottish theologian, born in Glasgow. He "was the only son of John Dick or Dickson, a wealthy merchant in the Trongate of Glasgow, whose father was an old feuar of some lands called the Kirk of Muir, in the parish of St. Ninians, Stirlingshire. He was born in Glasgow about 1583, and educated at the university, where he graduated M.A., and was appointed one of the regents or professors of philosophy." [4] John Dixon (d. 1715), was an English miniature...
Another 92 words (7 lines of text) are included under the topic Early Dyxson Notables in all our PDF Extended History products and printed products wherever possible.

Migration of the Dyxson family to Ireland

Some of the Dyxson family moved to Ireland, but this topic is not covered in this excerpt.
Another 154 words (11 lines of text) about their life in Ireland is included in all our PDF Extended History products and printed products wherever possible.

Migration of the Dyxson family

This oppression forced many Scots to leave their homelands. Most of these chose North America as their destination. Although the journey left many sick and poor, these immigrants were welcomed the hardy with great opportunity. Many of these settlers stood up for their newfound freedom in the American War of Independence. More recently, Scots abroad have recovered much of their collective heritage through highland games and other patriotic functions and groups. An examination of passenger and immigration lists has located various settlers bearing the name Dyxson: Joan Dickson who settled in Pennsylvania in 1682; Stephen Dickson settled in Virginia in 1619; one year before the "Mayflower"; William Dickson settled in Maryland in 1719.