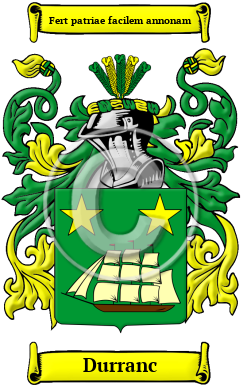 The region of Dauphine, in the French Alps, was the ancestral homeland of the prestigious surname Durranc. The surname Durranc is a nickname surname, which belongs to the category of surnames known as hereditary surnames. This particular surname was originally derived from the Old French word durant, which means enduring. It was a nickname commonly used for a stubborn, unbending person. A broad and miscellaneous class of surnames, nickname surnames referred to a characteristic of the first person who used the name. They can describe the bearer's favored style of clothing, appearance, habits, or character.

Early Origins of the Durranc family

The surname Durranc was first found in Dauphiny (French: Dauphiné or Dauphiné Viennois), a former province in southeastern France, where the family dates back to as early as 1095 when a member of the De Durand family took part in a Crusade. Ponce De Durant and Humbert, his brother, are mentioned in two charters dating 1188 and 1205.

Many members of this ancient family took part in the wars of their times, protecting the King and their country, for which they were rewarded with lands and titles. The son of Ponce, Pierre I De Durant (1175-1256) was a Lord who controlled much land in Chabeuil. In 1380, Noble Simon is mentioned in the ancient archives as a taxpayer and landowner. A prominent member of the family, Reymond De Durand served with distinction in the armies of Louis XI and of Charles VIII and in consideration of his loyal services, the latter King granted him the title of Guard of the castle of Perpignan in 1485, at which time the castle was of great importance for the State.

Charles Durand, Gentleman of the Chamber, married Anne de Bonne de Sénégas in 1566 and their grand-son, Charles, was the Baron of Sénégas and the ancestor of the Marquis of Sénégas. The majority of the members of the Durand family held lands and titles.

Nicolas Durand, born in 1637, son of Pierre and Nicole (née Prevost), travelled from France to Canada in the 17th century. After arriving in Quebec he married Françoise Gausse, daughter of Maurice and Marguerite (née Blay), on 12th September 1661. They remained together in Beauport, Quebec until Françoise passed away on 9th March 1714. [1]

Early History of the Durranc family

Notable amongst the family at this time was Jean-Etienne Duranti who received his Doctorate of Law, became the Attorney General, and the President of the Parliament of Toulouse, but was murdered by members of a league on February 16, 1589. His bust is at the Salle des Illustres and a street in Toulouse carries his name. Guillaume De Durant was the Lord of Montgeard and of Caneville and received his Doctorate of Law in the mid 1500's. Participating in the political affairs of the times, Paul De Durand, Lord of Roquefoulet and of Montgeard, was the President of the Parliament during...
Another 214 words (15 lines of text) are included under the topic Early Durranc Notables in all our PDF Extended History products and printed products wherever possible.

Migration of the Durranc family