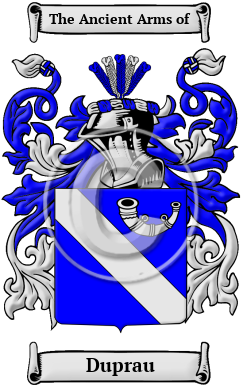 Early Origins of the Duprau family

The surname Duprau was first found in Auvergne, a historic province in south central France.

Antoine Dupre, born in 1643, son of Mathieu and Catherine, travelled from France to Canada in the 17th century. After he arrived in Quebec he married Marguerite Moutarchy, born in 1652, daughter of François and Claude, on 25th July 1672. They remained together in Quebec until Antoine's death at Château-Richer on 27th November 1686. [1]

Early History of the Duprau family

Notable amongst the family was Antoine Duprat (1463-1535), a French Cardinal and politician, Chancellor of France; Guillaume Duprat, born in Issoire in 1507, who was Bishop of Clermont; Gabriel Dupréau was a theologian in 1511; Pardoux Duprat who was involved in law, was an academic and a great philosopher around 1520; Claude Duprat was bishop of Mende in 1524; Guillaume Dupré was a sculptor, medal-maker, and stone engraver who lived in Sissone around 1576; Marie Dupré...
Another 76 words (5 lines of text) are included under the topic Early Duprau Notables in all our PDF Extended History products and printed products wherever possible.

Migration of the Duprau family

Some of the first settlers of this family name or some of its variants were: 320 individuals of the lineage who arrived from France onto Canadian shores between 1600 and 1900. Among them, Nicolas Dupré married in 1656 in Quebec.