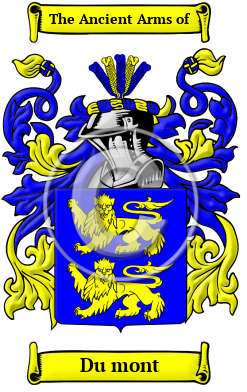 The enchanting region of Bourgoigne was the historical homeland of the prominent surname Du mont. Du mont is a topographic surname, which is a type of hereditary surname. These were given to a person who resided near a physical feature such as a hill, stream, church, or type of tree. Habitation names form the other broad category of surnames that were derived from place-names. They were derived from pre-existing names for towns, villages, parishes, or farmsteads. Other local names are derived from the names of houses, manors, estates, regions, and entire counties. As a general rule, the greater the distance between an individual and their homeland, the larger the territory they were named after. For example, a person who only moved to another parish would be known by the name of their original village, while people who migrated to a different country were often known by the name of a region or country from which they came. The name Du mont is derived from the Old French word mont, which means mountain or hill, and indicates that the original bearer lived at or near such a landmark.

The surname Du mont was first found in Burgundy (French: Bourgogne), an administrative and historical region of east-central France, where the family held a family seat from ancient times in the seigniory of St. Jean.

To the north they established a branch at St.-Eloi in the region of Artois, in mid-eastern France at Croix and St. Ligier in the region of Franche-Comté, and at Thil in the district of Chalon. The family name emerged as a powerful influence on the eastern border of France and along the Rhine to the north, as well as south from the coast to Switzerland. Over the border this French aristocratic family held interests in Luxembourg, Austria, Switzerland, and to the north in Belgium. In Switzerland, the family name was found in the districts of Vaud and Grisons, and in Belgium, at Gages in the province of Hainaut, and at Buret and Berghe in the province of Liège. In Forez as well as in Normandy, the Dumont family intermarried with the influential Bostaquet family. In Lorraine, three important family branches were formed, all of which were ennobled in 1527, 1529, and 1557 respectively. In Franche-Comté several knights were produced, in Gages family members were elevated to nobility as the Marquis of Gages, and in Luxembourg the family entered into nobility in 1707. In Germany, certain family members received the title of the Barons of the Grand Duchy of Hesse in 1853.

Jacques Dumont, born on 19th April 1665, son of René and Madeleine of Bayeux in Normandy, travelled from France to the New World in 1690. After arriving in the Canadian province of Quebec he married Marie Anne Tardif, born in 1676, daughter of Jacques and Barbe, at Beauport on 19th April 1694. [1]

This web page shows only a small excerpt of our Du mont research. More information is included under the topic Early Du mont History in all our PDF Extended History products and printed products wherever possible.

Notable amongst the family at this time was the Marquis of Gages; the Barons of the Grand Duchy of Hesse; Henry de Thier Du Mont (1610-1684), a notable French composer; Arsène-Jean-François Dumont (1849-1902), a French sociologist and demographer; Henri Dumont (1610-1684), a Belgian organist and composer, former organist at St. Paul's Church, Paris, France and composer of the "Messes royales"; Jean Dumont (1666-1726), a French publicist and historian, he opposed Louis XIV and absolute monarchy. He later moved...
Another 77 words (6 lines of text) are included under the topic Early Du mont Notables in all our PDF Extended History products and printed products wherever possible.

Du mont Settlers in United States in the 17th Century

Du mont Settlers in United States in the 18th Century

Du mont Settlers in United States in the 19th Century

Du mont Settlers in United States in the 20th Century

Du mont Settlers in Canada in the 17th Century

Du mont Settlers in Canada in the 18th Century

Du mont Settlers in Canada in the 19th Century

Du mont Settlers in New Zealand in the 19th Century