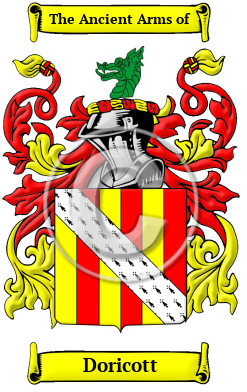 The name Doricott is of Anglo-Saxon origin and came from when the family lived in one of many similarly-named places in England. Settlements called Draycott are in Derbyshire, Oxfordshire, Somerset, and Worcestershire. Draycott Moor is in Berkshire, and Draycote is in Worcestershire. Draycott in the Clay and Draycott in the Moors are found in Staffordshire. Draycot Cerne, Draycot Fitz Payne, and Draycot Foliatt are all in Wiltshire. Thus, the surname Doricott belongs to the large category of Anglo-Saxon habitation names, which are derived from pre-existing names for towns, villages, parishes, or farmsteads.

Early Origins of the Doricott family

The surname Doricott was first found in Staffordshire at Draycot-in-the-Moors, a parish, in the union of Cheadle, S. division of the hundred of Totmonslow. "In the south side of the former chancel are a piscina and three sedilia, and a fine altar-tomb of the 16th century, with recumbent effigies, and small sculptured statues on the sides; and in the other chancel or chantry, are five altar-tombs, the earliest that of a Knight Templar. The church also contains some fine old monuments of the Draycot family. Painsley Hall, in the parish, was a place of some note in the civil wars; it was the manor-house of the Draycot family, and parts of the old building are still remaining: the present occupant, a few years since, filled up the moat by which it was surrounded." [1]

Early History of the Doricott family

This web page shows only a small excerpt of our Doricott research. Another 79 words (6 lines of text) covering the years 1566, 1571, 1560, 1571, 1510 and 1572 are included under the topic Early Doricott History in all our PDF Extended History products and printed products wherever possible.

It is only in the last few hundred years that the English language has been standardized. For that reason, early Anglo-Saxon surnames like Doricott are characterized by many spelling variations. As the English language changed and incorporated elements of other European languages, even literate people changed the spelling of their names. Scribes and monks in the Middle Ages spelled names they sounded, so it is common to find several variations that refer to a single person. The variations of the name Doricott include: Draycott, Draycote, Dracot, Dracott and others.

Notables of the family at this time include Sir Phillips Draycote of Draycote, Staffordshire; and Anthony Draycot (d. 1571 ), born at Draycott-in-the-Moors, Staffordshire, an English Roman Catholic churchman and lawyer who condemned numerous...
Another 33 words (2 lines of text) are included under the topic Early Doricott Notables in all our PDF Extended History products and printed products wherever possible.

Migration of the Doricott family to Ireland

Some of the Doricott family moved to Ireland, but this topic is not covered in this excerpt.
Another 63 words (4 lines of text) about their life in Ireland is included in all our PDF Extended History products and printed products wherever possible.

Migration of the Doricott family

Many English families tired of political and religious strife left Britain for the new colonies in North America. Although the trip itself offered no relief - conditions on the ships were extremely cramped, and many travelers arrived diseased, starving, and destitute - these immigrants believed the opportunities that awaited them were worth the risks. Once in the colonies, many of the families did indeed prosper and, in turn, made significant contributions to the culture and economies of the growing colonies. An inquiry into the early roots of North American families has revealed a number of immigrants bearing the name Doricott or a variant listed above: Thomas Draycott settled in Pennsylvania in 1797.