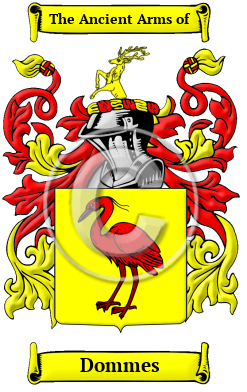 The name Dommes comes from the German province known as the Rhineland. In pre-medieval times, the German people used only one name, but as the population increased, hereditary surnames became necessary for people to maintain unique identities. Dommes is a nickname surname, a style of name based on an eke-name, or added name, that described a characteristic of its original bearer. Dommes is a name for a person who was innocent or naive having derived from the German word "dommer" which means the same.

Early Origins of the Dommes family

The surname Dommes was first found in the Rhine region, where the name was closely identified in early mediaeval times with the feudal society which would become prominent throughout European history. The name would later emerge as a noble family with great influence, having many distinguished branches, and become noted for its involvement in social, economic and political affairs.

Early History of the Dommes family

This web page shows only a small excerpt of our Dommes research. Another 172 words (12 lines of text) covering the years 1743, 1844, 1816 and 1410 are included under the topic Early Dommes History in all our PDF Extended History products and printed products wherever possible.

One can encounter great variation in the spelling of surnames: in early times, spelling in general, and thus the spelling of names was not yet standardized; and later, spellings would change with branching and movement of families. Variations of the name Dommes include Dommer, Domer, Dommar, Dommers, Dummar, Dumme, Dummer, Doemer, Domme and many more.

Notables with the name Dommes during this period were Margareta "Greta" Lambrektsdotter Dume (Greta Dume) (d. 1410), a Swedish heiress, played a political role in the struggle between Albert, King of Sweden...
Another 32 words (2 lines of text) are included under the topic Early Dommes Notables in all our PDF Extended History products and printed products wherever possible.

Migration of the Dommes family

Hundreds of thousands of Europeans, including many Rhinelanders, made the voyage to North America between the 17th and 20th centuries. It was an escape from religious persecution and poverty and also an opportunity for people to start over and own their own land. Most landed at Ellis Island, off New York before moving on to the states of Pennsylvania, Ohio, Texas, Illinois, and California. Some also landed in Canada and settled in Ontario, while others headed west to the prairie provinces. A study of passenger and immigration lists has shown a number of people bearing the name of Dommes, or one of its variants, reaching North America shores very early: Jacob Dommer arrived in Philadelphia in 1738; Capt. Dummer arrived in San Francisco, Cal. in 1851; Alice Dummer, age 38; settled with several other Dummer family members in Massachusetts in 1638..