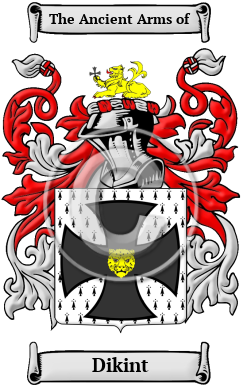 The ancestors of the Dikint family arrived in England following the Norman Conquest of 1066. The name Dikint came from the Norman baptismal name which means the son of Diccon, which is a diminution of the parent name, Richard. [1] Baptismal names began to appear as surnames relatively late in the growth of the naming tradition. This is a little surprising, given the popularity of biblical figures in the Christian countries of Europe. Nevertheless, surnames derived from baptismal names grew in popularity during the Middle Ages, and have become one of the foremost sources for surnames. Most of the early appearances of the name were found in the French form Dicon, which lingered until the 16th century.

Early Origins of the Dikint family

The surname Dikint was first found in Staffordshire where one of the first listings of the name was Richard Dicum who listed in the Assize Rolls there in 1203. The Subsidy Rolls of Staffordshire list John Dycon in 1327. [2] The Hundredorum Rolls of 1273 lists: Richard Digon in London; Roger Digun; and Alice Dikun while the Yorkshire Poll Tax Rolls of 1379 lists: Alicia Dycon, mayden; Ricardus Dicon; and Willwlmus Diconson. [1] The reader should pay special attention to the term "mayden" in the last entry as while the modern spelling is obviously "maiden," we must realize that as it was noted in the rolls, Alicia Dycon was a woman who held lands and was a person of distinction; a feat rarely seen in the 13th century! Today most of the spellings of the surname are usually seen appended with "s."

Early History of the Dikint family

This web page shows only a small excerpt of our Dikint research. Another 83 words (6 lines of text) covering the years 1150, 1812 and 1870 are included under the topic Early Dikint History in all our PDF Extended History products and printed products wherever possible.

It is only in the last few hundred years that the English language has been standardized. For that reason, Anglo-Norman surnames like Dikint are characterized by many spelling variations. Scribes and monks in the Middle Ages spelled names they sounded, so it is common to find several variations that refer to a single person. As the English language changed and incorporated elements of other European languages such as Norman French and Latin, even literate people regularly changed the spelling of their names. The variations of the name Dikint include Dickens, Dickins, Diggons, Diggens, Diggins, Dikens, Digons, Diquon and many more.

More information is included under the topic Early Dikint Notables in all our PDF Extended History products and printed products wherever possible.

Migration of the Dikint family to Ireland

Some of the Dikint family moved to Ireland, but this topic is not covered in this excerpt.
Another 58 words (4 lines of text) about their life in Ireland is included in all our PDF Extended History products and printed products wherever possible.

Migration of the Dikint family

Faced with the chaos present in England at that time, many English families looked towards the open frontiers of the New World with its opportunities to escape oppression and starvation. People migrated to North America, as well as Australia and Ireland in droves, paying exorbitant rates for passages in cramped, unsafe ships. Many of the settlers did not make the long passage alive, but those who did see the shores of North America were welcomed with great opportunity. Many of the families that came from England went on to make essential contributions to the emerging nations of Canada and the United States. Some of the first immigrants to cross the Atlantic and come to North America carried the name Dikint, or a variant listed above: Edward Dickens who settled in Barbados in 1683; Hugh Dicken settled in Virginia in 1623; Thomas Dicken settled in Antigua in 1685; Henry Dickens settled in Nantucket in 1823.