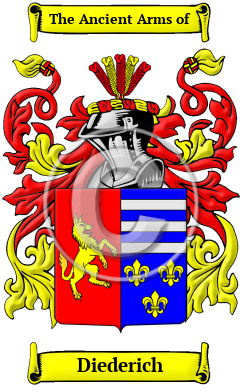 The German state of Prussia, which reached the zenith of its power in the late 19th century, is the glorious birthplace of the distinguished surname Diederich. In the medieval era, after the fall of the Roman Empire, the German lands were inhabited by a variety of Barbarian tribes. The borders of the Barbarian kingdoms changed frequently, but the region that became known as Prussia was roughly divided between the areas of Brandenburg-Prussia, West Prussia, and East Prussia. The colorful history of Brandenburg-Prussia, which is essentially the birthplace of modern Germany, provides a glimpse at the oldest origins of the Diederich family.

Early Origins of the Diederich family

The surname Diederich was first found in Prussia, where the family was anciently associated with the political and religious conflicts of the area. They declared allegiances to many nobles and princes of early history, lending their influence in struggles for power and status within the region. The family founded numerous branches, many of which acquired manors and estates in surrounding regions, where they contributed to the prosperity of their society. The name was made famous during the Middle Ages through the folk hero Dietrich von Bern, and the Dietrich-sagas which stem from the life of the Gothic King Theoderich the Great. The prefix "ded," "did," "died," "diet," or "diot" means people, nation, or folk, while the ending "Reich" means realm.

Early History of the Diederich family

This web page shows only a small excerpt of our Diederich research. Another 125 words (9 lines of text) covering the years 1816 and 1817 are included under the topic Early Diederich History in all our PDF Extended History products and printed products wherever possible.

Notable figures of the time with the name Diederich were Christoph Leopold Diederichs, who was the justice advisor and member of the state council of Prussia. Carl Anton Diederichs was the city director to Herford. Bernhard Carl Diederichs was president of...
Another 40 words (3 lines of text) are included under the topic Early Diederich Notables in all our PDF Extended History products and printed products wherever possible.

Diederich migration to the United States +

Diederich Settlers in United States in the 18th Century

Diederich Settlers in United States in the 19th Century