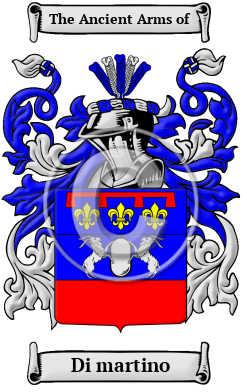 The surname Di martino came from the Latin name Martinus, which is a derivative of Mars, who was the Roman god of fertility and war.The popularity of the name Martin is due to Saint Martin de Tours, who was one of the best known saints in the Western World. With the spread of Christianity, people named their children after saints in the hope that the children might enjoy that saint's patronage. Martin is also one of the few saints' names, other than the names of Old English saints, found in England before the Norman Conquest.

The surname Di martino was first found in Brescia, where Theobaldo Martinengo, born in 930, was very important to the empire of Otto I. In 953 he donated 15 castles in the area to the empire, and his son Tebaldo led 12,000 men fighting against the Greeks for the empire. His son Leopardo became master of sixty castles, one of which he named Martinengo.

This web page shows only a small excerpt of our Di martino research. More information is included under the topic Early Di martino History in all our PDF Extended History products and printed products wherever possible.

Prominent among bearers of this family in early times was Simone Martini, known for his strides in the development of Italian Gothic Painting in the early 14th century. One of his well known works is The Road to Cavalry, a vivid painting with the influence of expressionism and drama from Giotto. Martini was said to be the most distinguished of Duccio's disciples. Another member of the Di martino lineage is Guglielmo Martini, who became senator of Palermo in 1335. More famous is Francesco di Giorgio, better known as Francesco di Siena, born in 1439. He was trained as a painter, but became...
Another 229 words (16 lines of text) are included under the topic Early Di martino Notables in all our PDF Extended History products and printed products wherever possible.

In the United States, the name Di martino is the 12,442nd most popular surname with an estimated 2,487 people with that name. [1]

The records on immigrants and ships' passengers show a number of people bearing the name Di martino:

Di martino Settlers in United States in the 19th Century

Di martino Settlers in United States in the 20th Century