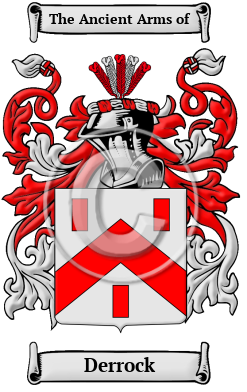 Irish names tend to vary widely in their spelling and overall form. The original Gaelic form of the name Derrock is O Deirg, from the word "dearg," which means red.

Early Origins of the Derrock family

The surname Derrock was first found in County Mayo (Irish: Maigh Eo) located on the West coast of the Republic of Ireland in the province of Connacht, where they held a family seat in the baronies of Carra, Erris, and Tyrawley. They were descended from Fiachra, brother of Niall Mor, more commonly known as King Niall of the Nine Hostages, perhaps Ireland's greatest General/King.

Early History of the Derrock family

This web page shows only a small excerpt of our Derrock research. Another 127 words (9 lines of text) covering the years 1656, 1608, 1601, 1578 and 1557 are included under the topic Early Derrock History in all our PDF Extended History products and printed products wherever possible.

Within the archives researched, many different spelling variations of the surname Derrock were found. These included One reason for the many variations is that scribes and church officials often spelled an individual's name as it sounded. This imprecise method often led to many versions. Derig, O'Derig, O'Derrig, Derrig, Derieg, Derick, Derrick, O'Derick, O'Derrick, O'Durrig, Durrig, Derigan, Derigen and many more.

Notable among the family name at this time was Donogh Dáll Ó Derrig, aka Blind Donogh O'Derrick, Irish rapparee, executed December 1656. Thomas Derrick (fl. 1608) was an English executioner. Little is known of his lineage. However, he was convicted of rape, and was subequently pardoned if he became the executioner at Tyburn. Derrick executed more than 3,000 people in his career, including his pardoner, the Earl of Essex, in 1601. The...
Another 70 words (5 lines of text) are included under the topic Early Derrock Notables in all our PDF Extended History products and printed products wherever possible.

Migration of the Derrock family

During the 19th century thousands of impoverished Irish families made the long journey to British North America and the United States. These people were leaving a land that had become beset with poverty, lack of opportunity, and hunger. In North America, they hoped to find land, work, and political and religious freedoms. Although the majority of the immigrants that survived the long sea passage did make these discoveries, it was not without much perseverance and hard work: by the mid-19th century land suitable for agriculture was short supply, especially in British North America, in the east; the work available was generally low paying and physically taxing construction or factory work; and the English stereotypes concerning the Irish, although less frequent and vehement, were, nevertheless, present in the land of freedom, liberty, and equality for all men. The largest influx of Irish settlers occurred with Great Potato Famine during the late 1840s. Research into passenger and immigration lists has brought forth evidence of the early members of the Derrock family in North America: John Derick, who arrived in Philadelphia, Pennsylvania in 1865; Edward Derigan, who arrived in Philadelphia in 1875; the Widow Derrick, who settled in Georgia in 1738 with two sons and two daughters.