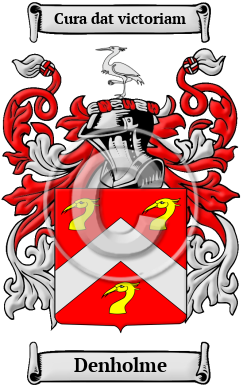 Though hidden in the annals of history, the chronicles of Scotland reveal the early records of the Norman surname Denholme which ranks as one of the oldest. The history of the name is interwoven within the colorful plaid of Scottish history and is an intrinsic part of the heritage of Scotland.

Early Origins of the Denholme family

The surname Denholme was first found in Denholm, a small village located between Jedburgh and Hawick in the Scottish Borders. [1]

Early History of the Denholme family

Notable among the family at this time was Henry Denham ( fl. 1591), English printer who was presented as an apprentice with Richard Tottel, 14 Oct. 1556. "He was fined in 1564 for printing unlicensed primers, in 1565 and 1584 for using indecorous language, and for improper behaviour on other occasions, which conduct did not prevent him from being called to the livery of the Stationers' Company in 1572, in serving as renter in 1580 and 1581, and being appointed under-warden in 1586 and 1588. He lived in Paternoster Row, at the sign of the Star, which, with the motto 'Os homini...
Another 111 words (8 lines of text) are included under the topic Early Denholme Notables in all our PDF Extended History products and printed products wherever possible.

Migration of the Denholme family to Ireland

Some of the Denholme family moved to Ireland, but this topic is not covered in this excerpt.
Another 33 words (2 lines of text) about their life in Ireland is included in all our PDF Extended History products and printed products wherever possible.

Denholme migration to the United States +

Denholme Settlers in United States in the 18th Century