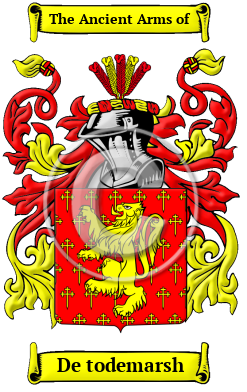 The surname De todemarsh was first found in Berkshire at Tidmarsh, a parish, in the union of Bradfield, hundred of Theale. The ancient 12th century church is of particular importance. "The church is partly Norman, and partly in the early English style; the doorway is a particularly fine specimen of Norman architecture: the ceiling of the chancel is of panelled oak, and there are two slabs of blue marble, with some ancient brasses." [1]

The first record of the place name was Tedmerse in 1196 and it literally meant "people's or common marsh", from the Old English words "theod" + "mersc. " [2] The family name was first referenced in the year 1315 when Stephen de Tydemersh of Tidmarsh in Berkshire held estates in Kent. [3]

Titchmarsh is a parish, in the union of Thrapston, hundred of Navisford in Northamptonshire. "The church, built in 1247, has a beautiful massive tower of modern date; it was thoroughly repaired in 1840-43, at a cost of about £2000. " [1]

This latter parish dates back to Saxon times when in 973, it was known as Tuteanmerc, but by the time of the Domesday Book of 1086, the parish was known as Ticemerse. Literally the place name means "marsh or a man called Ticcea," from the Old English personal name + "mersc." [2]

This web page shows only a small excerpt of our De todemarsh research. Another 61 words (4 lines of text) covering the years 1602, 1749 and 1172 are included under the topic Early De todemarsh History in all our PDF Extended History products and printed products wherever possible.

More information is included under the topic Early De todemarsh Notables in all our PDF Extended History products and printed products wherever possible.

Migration of the De todemarsh family to Ireland

Some of the De todemarsh family moved to Ireland, but this topic is not covered in this excerpt.
Another 61 words (4 lines of text) about their life in Ireland is included in all our PDF Extended History products and printed products wherever possible.

Migration of the De todemarsh family