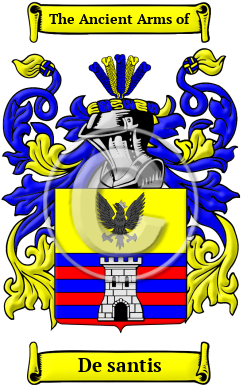 The surname De santis is patronymic in origin, meaning it was based on the first name of a forefather. In this case, De santis is derived from the Latin word "sanctus," meaning "holy" or "devout," thus the original bearer of the name was known to be a holy and devout person.

The surname De santis was first found in northern Italy, particularly in the regions of Piedmont, Lombardy and Tuscany.

This web page shows only a small excerpt of our De santis research. More information is included under the topic Early De santis History in all our PDF Extended History products and printed products wherever possible.

Prominent among members of the family was Teodoro Santi di Alessandria, who waged war in Inghilterra, in the 10th century, under the flag of Arnolfo VI, count...
Another 27 words (2 lines of text) are included under the topic Early De santis Notables in all our PDF Extended History products and printed products wherever possible.

In the United States, the name De santis is the 3,604th most popular surname with an estimated 7,461 people with that name. [1]

De santis Settlers in United States in the 19th Century