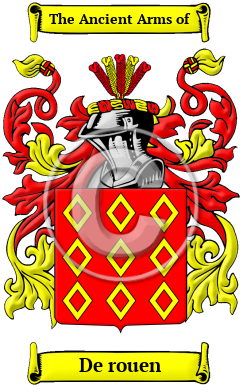 The surname De rouen was first found in Brittany, originally Armorica in ancient times, where the family has been a prominent family for centuries, and held a family seat with lands and manor. The family were well established in the region of Dol and several members of the family distinguished themselves through their contributions toward the community in which they lived and were rewarded with lands, titles and letters patent confirming their nobility.

This web page shows only a small excerpt of our De rouen research. Another 45 words (3 lines of text) covering the years 1008, 1128, 1603 and 1570 are included under the topic Early De rouen History in all our PDF Extended History products and printed products wherever possible.

Spelling variations of this family name include: De Rouen, Rohan, Rouan, Rouanne, Rouannet and others.

Notable amongst this name at this time was of Brittany. They are believed to be descended from the ancient Counts of Porrhoët and Rennes who were recorded in 1008 from whom descend the royal House of Rohan which...
Another 37 words (3 lines of text) are included under the topic Early De rouen Notables in all our PDF Extended History products and printed products wherever possible.

In the United States, the name De rouen is the 9,040th most popular surname with an estimated 2,487 people with that name. [1]

Migration of the De rouen family

Some of the first settlers of this family name or some of its variants were: Jacques Rouanne, who came to Louisiana in 1719; Michel Rouen, who arrived in Quebec in 1749; Alexander Rouan, who settled in Jamaica in 1763; Thomas Rouan, who arrived in United States or West Indies in 1769.