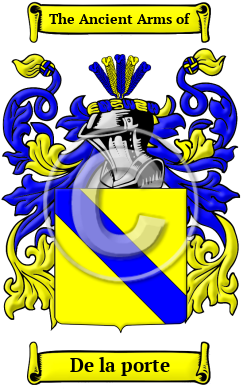 Noble surnames, such as De la porte, evoke images of the ancient homeland of the French people. The original bearer of the name De la porte, which is a local surname, once lived, held land, or was born in the beautiful region of France. In France, hereditary surnames were adopted according to fairly general rules and during the late Middle Ages, names that were derived from localities became increasingly widespread. Local names originally denoted the proprietorship of the village or estate. The De la porte family originally lived near a door or gate of particular interest, such as the gates to a fortified city or a unusually large or unique door. The name De la porte is derived from the Old French words "la" and "porte," which mean "the" and "door" respectively.

The surname De la porte was first found in Berry, a former province until 1790 when it became a region in central France where this distinguished family held a family seat in d'Ysserteux, and were members of the aristocratic families of the region. In the same region of Berry they also branched to Riants.

The family moved north into Brittany at Kerduault, and to L'Estang and to Cree'Hanton in Brittany. They became the Barons de Vezins in that region. At Crozon in Brittany they became elevated to the nobility as the Comtes de Crozon. They also branched to Dauphiné to the south east, to Anjou (Vellade), to Perigord (Lubignac), and Theil in Poitou. They also branched south to Guyenne. The Marquis de la Porte eventually became the Comtes d'Hust and held a family seat in the west of France at Saintonge, Angoumois and Perigord.

Jacques Laporte, born in 1621, travelled from Perche, France to Canada in the 17th century. After arriving in Quebec he married Nicole Duchesne, born in 1641, at Montreal in 1657. [1]

This web page shows only a small excerpt of our De la porte research. More information is included under the topic Early De la porte History in all our PDF Extended History products and printed products wherever possible.

Another 41 words (3 lines of text) are included under the topic Early De la porte Notables in all our PDF Extended History products and printed products wherever possible.

De la porte Settlers in Canada in the 17th Century