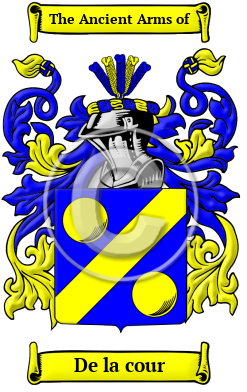 The surname De la cour was first found in Brittany.

Notable amongst this name at this time was an individual of the house of Lecourt, such as François, lord of Béru, who reaffirmed his nobility in 1686, and was father of Etienne, Cavalier of Saint-Lazare in 1687. Etienne's son was Edme, Lieutenant-colonel, Cavalier of Saint-Louis, whose son in turn was Etienne-Nicolas, Cavalier of Saint-Lazare, captain of the Royal Chivalry. Pierre-François Lecourrayer...
Another 60 words (4 lines of text) are included under the topic Early De la cour Notables in all our PDF Extended History products and printed products wherever possible.

De la cour Settlers in Canada in the 19th Century