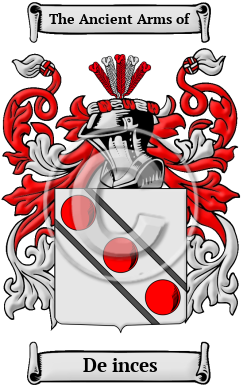 The Anglo-Saxon name De inces comes from when the family resided in the region of Ince in Cheshire West. De inces is a topographic surname, which was given to a person who resided near a physical feature such as a hill, stream, church, or type of tree.

The surname De inces was first found in Cheshire at Ince, a village and civil parish in the unitary authority of Cheshire West and Chester and historically in the union of Great Boughton, Second division of the hundred of Eddisbury. The first record of this local was found in the Domesday Book of 1086 when it was listed as Inise. [1] Ince-in-Makerfield or Ince is a regenerated township in the Metropolitan Borough of Wigan, in Greater Manchester, but historically in Lancashire. The earliest mention of the Manor of Ince and the Ince family dates from about 1202 in this area. At that time, it was part of the barony of Newton in Makerfield (Newton le Willows.) "The family of Ince were anciently lords of this manor, which, in the reign of Henry IV., was conveyed by their heiress to the Gerards." [2]

This web page shows only a small excerpt of our De inces research. Another 74 words (5 lines of text) covering the years 1679, 1660 and 1635 are included under the topic Early De inces History in all our PDF Extended History products and printed products wherever possible.

The English language only became standardized in the last few centuries; therefore, spelling variations are common among early Anglo-Saxon names. As the form of the English language changed, even the spelling of literate people's names evolved. De inces has been recorded under many different variations, including Ince, Ince, Ins, Ines, de Inces, Inch and others.

Another 35 words (2 lines of text) are included under the topic Early De inces Notables in all our PDF Extended History products and printed products wherever possible.

Migration of the De inces family

For many English families, the political and religious disarray that shrouded England made the far away New World an attractive prospect. On cramped disease-ridden ships, thousands migrated to those British colonies that would eventually become Canada and the United States. Those hardy settlers that survived the journey often went on to make important contributions to the emerging nations in which they landed. Analysis of immigration records indicates that some of the first North American immigrants bore the name De inces or a variant listed above: Gabriel and Jonathon Ince, who settled in New Haven Conn. in 1630; Thomas Ince settled in Virginia in 1654.