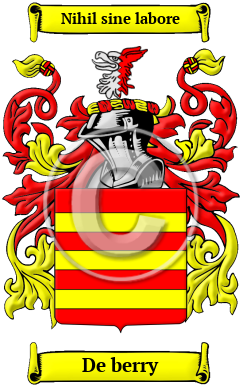 De berry is a name that came to England in the 11th century wave of migration that was set off by the Norman Conquest of 1066. The De berry family lived in the county of Devon, where the family settled after arriving in England with William the Conqueror at the time of the Norman Conquest of England. The name is derived from the phrase at the Bury which has evolved to the more modern term borough.

The surname De Berry was first found in Devon, in the parish of Berry-Pomeroy and before that Berry or Berri was the appellation of one of the old provinces of France. [1] [2] Another source notes "scattered disconnectedly over England. It is most numerous in Lancashire, and afterwards in the counties of Northampton, Warwick, and Devon. Probably it is usually derived from places, Berry being the name of a Devonshire parish, whilst Bury is the name of towns and localities in Lancashire, Suffolk, etc." [3]

The English language only became standardized in the last few centuries. For that reason, spelling variations are common among many Anglo-Norman names. The shape of the English language was frequently changed with the introduction of elements of Norman French, Latin, and other European languages; even the spelling of literate people's names were subsequently modified. De berry has been recorded under many different variations, including Berry, Bery, Berey, De Berry and others.

Outstanding amongst the family at this time was John Berry, High Sheriff of Herefordshire in 1450; Sir Thomas Berry of Buckland; Alexander Berry (1781-1873), Scottish surgeon, merchant, and explorer after whom the Australian town is named; Sir John Berry (1635-1690), English naval officer of the Royal Navy, and was in 1675 the captain of the annual convoy to Newfoundland; and Major-General James Berry (d. 1691), English Parliamentary officer who fought in the English Civil War. On the more infamous side, it is claimed that Charlotte de Berry (born 1636) was an English female...
Another 92 words (7 lines of text) are included under the topic Early De berry Notables in all our PDF Extended History products and printed products wherever possible.

In the United States, the name De berry is the 4,696th most popular surname with an estimated 7,461 people with that name. [4]

Migration of the De berry family to Ireland

Some of the De berry family moved to Ireland, but this topic is not covered in this excerpt.
Another 66 words (5 lines of text) about their life in Ireland is included in all our PDF Extended History products and printed products wherever possible.

To escape the uncertainty of the political and religious uncertainty found in England, many English families boarded ships at great expense to sail for the colonies held by Britain. The passages were expensive, though, and the boats were unsafe, overcrowded, and ridden with disease. Those who were hardy and lucky enough to make the passage intact were rewarded with land, opportunity, and social environment less prone to religious and political persecution. Many of these families went on to be important contributors to the young nations of Canada and the United States where they settled. De berrys were some of the first of the immigrants to arrive in North America:

De berry Settlers in United States in the 20th Century