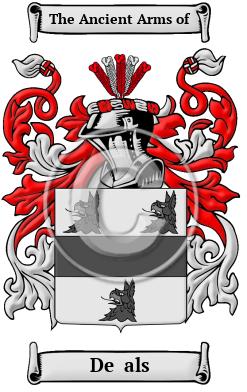 "The family of Hals, or Als, are said to have been an ancient British tribe, so denominated from Alsius Duke of Devonshire, the father of Orgar; unless we credit another account, which states them to have descended from John de Als, lord of the barton of Als, now Alse, in the parish of Buryan." [1]

The surname De als was first found in Devon and Cornwall.

"The manor of Laneseley, [in the parish of Gulval, Cornwall] from which the parish derived its name, belonged at a very early period to the family of De Als, who are said to have taken their name from a manor called Alsa or Als, in the parish of Buryan. In 1266 Simon De Als gave this manor to the priory of St. Germans, for the health and salvation of his soul, that of his wife, and those of his ancestors and relations. It was a bargain with the prior and his canonical brethren, for the eternal happiness of the whole family. From this period until the dissolution, the prior and his successors claimed this manor, and with it the ecclesiastical income of the rectory, throughout the parish. But at the time of the Reformation, this property being seized by the crown, the manor was granted to Beaumont and Barry, from whom it passed to the family of Tripcony about the year 1565. By a descendant of this family it was mortgaged to Sir William Hals, of Fentongollan, who was lineally descended from De Alsa, its ancient possessor, and who was ancestor of Hals the historian. In this family it became the subject of much litigation and trouble, in consequence of some mortgages and sales, that led to a suit in chancery; after which it was purchased by the Onslow family, in whom it is still vested." [1]

"Halse was the name of an eminent family of Kenedon in Sherford parish, near Kingsbridge, during the 15th, 16th, and 17th centuries; to this family belonged a Justice of the Common Pleas and a Bishop of Lichfield, both of whom lived in the reign of Henry VI. Matthew Halse was a churchwarden of Littleham, Exmouth, in 1730, and the name still occurs in the town. Halse is a Somerset parish, and an old Taunton family bore the name in the 16th century." [4]

"Kennedon, in the [parish of Stokenham, Devon], in the fifteenth century became a seat of the family of Hals. Here lived John Hals, Justice of the Common Pleas in 1423, and here was born his son, of the same name, who, in 1450, was made Bishop of Lichfield and Coventry." [5]

The English language only became standardized in the last few centuries; therefore,spelling variations are common among early Anglo-Saxon names. As the form of the English language changed, even the spelling of literate people's names evolved. De als has been recorded under many different variations, including Halse, Hals, Halls and others.

Notables of the family at this time include John Hals, who was appointed one of the Judges of the Common Pleas in 1423, and who built a mansion in Kenedon, Devon; and William Hals, the celebrated historian, who was the son of James Halse, the M.P. for St. Ives about 1530. William Hals (1655-1737?) was a Cornish historian, best known for his unfinished work "The Compleat History of Cornwall." He was born at Tresawen, Merther, and was the second son...
Another 79 words (6 lines of text) are included under the topic Early De als Notables in all our PDF Extended History products and printed products wherever possible.

Migration of the De als family

For many English families, the political and religious disarray that shrouded England made the far away New World an attractive prospect. On cramped disease-ridden ships, thousands migrated to those British colonies that would eventually become Canada and the United States. Those hardy settlers that survived the journey often went on to make important contributions to the emerging nations in which they landed. Analysis of immigration records indicates that some of the first North American immigrants bore the name De als or a variant listed above: William Halse, who settled in Boston in 1765.