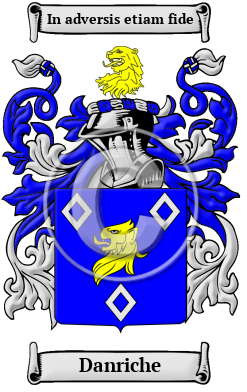 Early Origins of the Danriche family

The surname Danriche was first found in Tandridge, Surrey, a parish in the union of Godstone, first division of the hundred of Tandridge. [1] [2] [3] An ancient Saxon village, it was first recorded c. 965 as Tenhric, but by the Domesday Book of 1086, it was known as Tenrige. The name is derived from the Old English "hrycg" meaning "ridge, hill." [4]

Early History of the Danriche family

This web page shows only a small excerpt of our Danriche research. Another 92 words (7 lines of text) covering the years 1455, 1487, 1691, 1750, 1665, 1747 and 1710 are included under the topic Early Danriche History in all our PDF Extended History products and printed products wherever possible.

Distinguished members of the family include Bartholomew Dandridge (1691-1750) English portrait painter whose portrait of Nathaniel Hooke, the historian, is in the National Portrait Gallery. [6] Joseph Dandridge (1665-1747)...
Another 27 words (2 lines of text) are included under the topic Early Danriche Notables in all our PDF Extended History products and printed products wherever possible.

Migration of the Danriche family