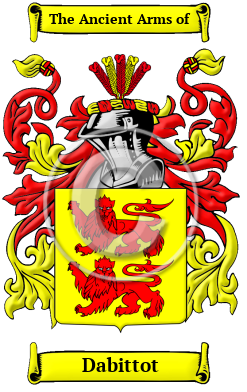 Early Origins of the Dabittot family

The surname Dabittot was first found in Herefordshire where they held a family seat as Lords of the Manor. Urse de Abbetot of Abbetot in the Seine-Inf in Normandy, very powerful Baron, was granted land in Hereford, Worcestershire, and Gloucestershire and he was sheriff of the latter two counties in 1067. He built Malvern Priory. He also built Emley Castle. Urse was part of the King's council in 1073 and helped suppress the Earls of Hereford and Norfolk. The line continued for 600 years.

Early History of the Dabittot family

This web page shows only a small excerpt of our Dabittot research. Another 150 words (11 lines of text) covering the years 1327, 1455, 1487, 1510, and 1600 are included under the topic Early Dabittot History in all our PDF Extended History products and printed products wherever possible.

More information is included under the topic Early Dabittot Notables in all our PDF Extended History products and printed products wherever possible.

Migration of the Dabittot family