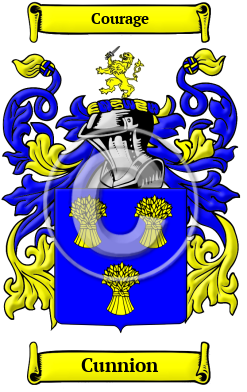 Early Origins of the Cunnion family

The surname Cunnion was first found in Norfolk, Lincolnshire, and Yorkshire in England, in the 12th and 13th centuries. Robert of Comyn (Comines,) a noble who accompanied William the Conqueror in 1066 and was made Earl of Northumberland. [3]

Early History of the Cunnion family

Outstanding amongst the family at this time was Alexander Comyn (d. 1289), Earl of Buchan, a Scotish-Norman nobleman, son of William Comyn and Marjory, Countess of Buchan, the heiress of the last native Scottish Mormaer of Buchan, Fergus...
Another 37 words (3 lines of text) are included under the topic Early Cunnion Notables in all our PDF Extended History products and printed products wherever possible.

Migration of the Cunnion family to Ireland

Some of the Cunnion family moved to Ireland, but this topic is not covered in this excerpt.
Another 60 words (4 lines of text) about their life in Ireland is included in all our PDF Extended History products and printed products wherever possible.

Cunnion migration to the United States +

Cunnion Settlers in United States in the 19th Century