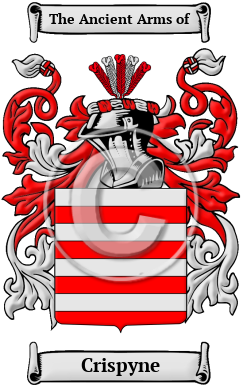 Early Origins of the Crispyne family

The surname Crispyne was first found in Oxfordshire where they had been granted the lands of Cowley by William the Conqueror for their assistance at the Battle of Hastings in 1066.

Early History of the Crispyne family

Outstanding amongst the family at this time was Sir Henry Crispe was a distinguished knight at the time of King Henry VIII; Captain William Cripsin (1627-1681), one of five British Commissioners appointed by William Penn for settling his...
Another 38 words (3 lines of text) are included under the topic Early Crispyne Notables in all our PDF Extended History products and printed products wherever possible.

Migration of the Crispyne family to Ireland

Some of the Crispyne family moved to Ireland, but this topic is not covered in this excerpt. More information about their life in Ireland is included in all our PDF Extended History products and printed products wherever possible.

Migration of the Crispyne family