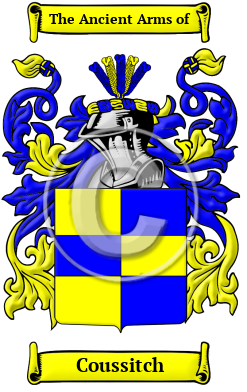 When the Anglo-Normans began to settle in Ireland, they brought the tradition of local surnames to an island which already had a Gaelic naming system of hereditary surnames established. Unlike the Irish, the Anglo-Normans had an affinity for local surnames. Local surnames, such as Coussitch, were formed from the name of a place or a geographical landmark. Often, these place names were prefixed by "de," which means "from" in French: in later years, the prefix sometimes became joined to the name, or was sometimes dropped. The Coussitch family name is thought to have come from any of several places named Cussac in France; such as Cussac in Guienne (Guyenne), Cussac in Limousin, or from Cussac in Auvergne. These place names are thought to derive from Cucius or Cussius, a Romano-Gallic personal name, along with the suffix "-acum." After the name came to Ireland, it took on the Gaelic form Ciomhsóg. However, in the county of Clare, the Gaelic form of the name is Mac Iosóg.

Early Origins of the Coussitch family

The surname Coussitch was first found in County Meath (Irish: An Mhí) anciently part of the kingdom of Brega, located in Eastern Ireland, in the province of Leinster, where Jeoffrey Le Cusack was first recorded. He was named after a town of that name in France and came to Ireland shortly after the English invasion. Adam Cusack, his grandson "slew William Barret and his brothers in Connaught, on account of a quarrel about lands " in 1282. [1]

Early History of the Coussitch family

Notable amongst the family up to this time was Thomas Cusack was Mayor of Dublin in 1409; and Sir Thomas Cusack, who fought as a lancer at the Battle of Agincourt in 1415. Sir Thomas Cusack (1490-1571) was Lord Chancellor of Ireland. He was "of an ancient family in Meath, was Sheriff of...
Another 52 words (4 lines of text) are included under the topic Early Coussitch Notables in all our PDF Extended History products and printed products wherever possible.

Migration of the Coussitch family

During the middle of the 19th century, Irish families often experienced extreme poverty and racial discrimination in their own homeland under English rule. Record numbers died of disease and starvation and many others, deciding against such a fate, boarded ships bound for North America. The largest influx of Irish settlers occurred with Great Potato Famine of the late 1840s. Unfortunately, many of those Irish that arrived in Canada or the United States still experienced economic and racial discrimination. Although often maligned, these Irish people were essential to the rapid development of these countries because they provided the cheap labor required for the many canals, roads, railways, and other projects required for strong national infrastructures. Eventually the Irish went on to make contributions in the less backbreaking and more intellectual arenas of commerce, education, and the arts. Research early immigration and passenger lists revealed many early immigrants bearing the name Coussitch: Christopher Cusack who settled in Philadelphia, Pennsylvania in 1830; Betsey Cusack settled in Boston Massachusetts in 1849; Pat Cusack settled in Canada in 1839.