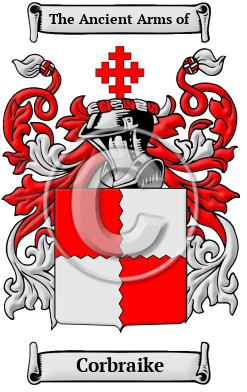 Corbraike is a name of ancient Anglo-Saxon origin and comes from the family once having lived in Corbridge, a parish in Northumberland. The place name meant "bridge near Corchester." It is made up of two elements, Cor, a diminutive of the place name Corchester, and brycg, an Old English word for bridge.

"This place, which is of great antiquity, appears to have been known to the Romans, who, at a short distance to the west, had a station on the line of the Watling-street, supposed by Camden to have been the Curia Ottadinarum of Ptolemy, and by Horsley the Corstopitum of Antoninus, and which is now called Corchester. " [1]

Early Origins of the Corbraike family

The surname Corbraike was first found in Northumberland at Corbridge which dates back to at least 1050 when it was listed as Corebricg. It is believed to be the most northerly town in the Roman Empire and ruins of a Roman fort can still be seen there today.

By 1138, King David of Scotland, had made frequent incursions into the English territories and had encamped his forces here, but was subsequently burnt by the Scots in 1296, and again in 1311. From its great importance, King John, expecting to find concealed treasure, directed a search, but found nothing.

The Battle of Corbridge took place at Corbridge in 918. It decided the fate of the Viking kingdom of Northumbria and the English Earldom of Bamburgh.

Thomas of Corbridge (d. 1304), was Archbishop of York and probably native of the little town of Corbridge on the Upper Tyne, near Hexham. [2]

Early History of the Corbraike family

This web page shows only a small excerpt of our Corbraike research. Another 23 words (2 lines of text) covering the years 1312, 1304, 1299 and 1304 are included under the topic Early Corbraike History in all our PDF Extended History products and printed products wherever possible.

Sound was what guided spelling in the essentially pre-literate Middle Ages, so one person's name was often recorded under several variations during a single lifetime. Also, before the advent of the printing press and the first dictionaries, the English language was not standardized. Therefore, spelling variations were common, even among the names of the most literate people. Known variations of the Corbraike family name include Corbridge, Corbreyke, Corbreake, Corbig and others.

Another 33 words (2 lines of text) are included under the topic Early Corbraike Notables in all our PDF Extended History products and printed products wherever possible.

Migration of the Corbraike family