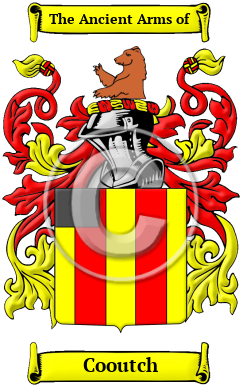 The distinguished surname Cooutch emerged among the industrious people of Flanders, which was an important trading partner and political ally of Britain during the Middle Ages. As a result of the frequent commercial intercourse between the Flemish and English nations, many Flemish migrants settled in Britain. In early times, people were known by only a single name. However, as the population grew and people traveled further afield, it became increasingly necessary to assume an additional name to differentiate between bearers of the same personal name. Occupational surnames were derived from the common trades of the medieval era. The surname Cooutch is an occupational name for a maker of couches or beds or an upholsterer. The surname is derived from the Old French word couch, which means couch. [1]Occupational names frequently were derived from the principal object associated with the activity of the original bearer, such as tools or products. These types of occupational surnames are called metonymic surnames.

Early Origins of the Cooutch family

The surname Cooutch was first found in Oxfordshire where they held a family seat from early times. Couch's Mill is a small hamlet in Cornwall which has been spelt Couchs Mill, Couch's Mill and Couches Mill over the years.

Early History of the Cooutch family

More information is included under the topic Early Cooutch Notables in all our PDF Extended History products and printed products wherever possible.

Migration of the Cooutch family to Ireland

Some of the Cooutch family moved to Ireland, but this topic is not covered in this excerpt.
Another 50 words (4 lines of text) about their life in Ireland is included in all our PDF Extended History products and printed products wherever possible.

Migration of the Cooutch family

An examination of many early immigration records reveals that people bearing the name Cooutch arrived in North America very early: Mr. Couch who settled in Louisiana in 1721; Arthur and Charles Couch settled in Maryland in 1774; D. Couch settled in San Francisco Cal. in 1852; Elianore Couch landed in America in 1760.