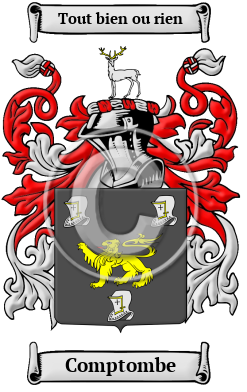 The ancestors of the name Comptombe date back to the Anglo-Saxon tribes of Britain. The name is derived from when the Comptombe family lived in Compton, a place-name found in numerous locales throughout England. Villages called Compton are found in Berkshire, Huntingdonshire, Surrey, Sussex and Wiltshire. The name probably sprang from all of these locales at one time or another. Many of the villages date back to the Domesday Book [1] where there were listed with names like Contune (Berkshire), Cunone (Huntingdonshire), and more. However, the oldest listing was found in Compton Abbas, Dorset where it dates back before the Domesday Book to 956 as Cumtune. The name literally was derived from the Old English "cumb" + "tun" meaning "farmstead or village in a valley," so one can understand the many listings. [2]

Early Origins of the Comptombe family

The surname Comptombe was first found in Devon where they held a family seat at Compton Castle, a fortified manor house in the village of Compton. The original undefended manor house was built in the mid-14th century and was home to Sir Humphrey Gilbert (1539-1583), colonizer of Newfoundland and half-brother of Sir Walter Raleigh.

Early History of the Comptombe family

It is only in the last few hundred years that the English language has been standardized. For that reason, early Anglo-Saxon surnames like Comptombe are characterized by many spelling variations. As the English language changed and incorporated elements of other European languages, even literate people changed the spelling of their names. The variations of the name Comptombe include: Compton, Comptons, Competom, Comptown, Comptowne, Comptoun, Comptaun, Comptaune, Comptoune, Coompton, Combton, Combtons, Combtown, Combtaune, Wilmington and many more.

Migration of the Comptombe family

Many English families tired of political and religious strife left Britain for the new colonies in North America. Although the trip itself offered no relief - conditions on the ships were extremely cramped, and many travelers arrived diseased, starving, and destitute - these immigrants believed the opportunities that awaited them were worth the risks. Once in the colonies, many of the families did indeed prosper and, in turn, made significant contributions to the culture and economies of the growing colonies. An inquiry into the early roots of North American families has revealed a number of immigrants bearing the name Comptombe or a variant listed above: Thomas Compton settled in Roxbury, Massachusetts, in 1634; and was made a freeman of the colony in 1637. He moved to Boston the same year. John Compton was a wheelwright in Boston in 1638. William Compton settled in Ipswich in 1662.