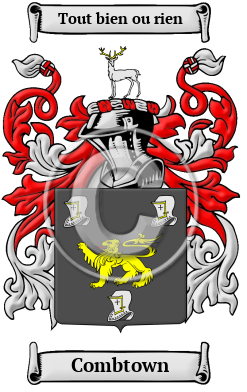 The origins of the Combtown name come from when the Anglo-Saxon tribes ruled over Britain. The name Combtown was originally derived from a family having lived in Compton, a place-name found in numerous locales throughout England. Villages called Compton are found in Berkshire, Huntingdonshire, Surrey, Sussex and Wiltshire. The name probably sprang from all of these locales at one time or another. Many of the villages date back to the Domesday Book [1] where there were listed with names like Contune (Berkshire), Cunone (Huntingdonshire), and more.

Early Origins of the Combtown family

The surname Combtown was first found in Devon where they held a family seat at Compton Castle, a fortified manor house in the village of Compton. The original undefended manor house was built in the mid-14th century and was home to Sir Humphrey Gilbert (1539-1583), colonizer of Newfoundland and half-brother of Sir Walter Raleigh.

Early History of the Combtown family

Before English spelling was standardized a few hundred years ago, spelling variations of names were a common occurrence. Elements of Latin, French and other languages became incorporated into English through the Middle Ages, and name spellings changed even among the literate. The variations of the surname Combtown include Compton, Comptons, Competom, Comptown, Comptowne, Comptoun, Comptaun, Comptaune, Comptoune, Coompton, Combton, Combtons, Combtown, Combtaune, Wilmington and many more.

Migration of the Combtown family