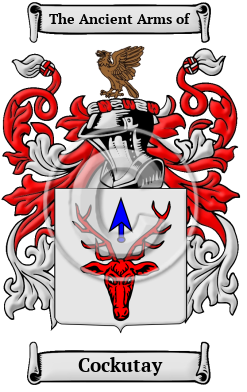 The saga of the Cockutay family begins among the people of the ancient tribe of the Picts. They lived in Cults in Aberdeenshire where the name can be found since very early times.

Early Origins of the Cockutay family

The surname Cockutay was first found in Aberdeenshire. The name is "a common surname in Upper Deeside. Richard de Cotis appears as a landowner in Elgyn, 1343. In 1392 John de Cowtis and Donald de Cowtis were put to the horn as part guilty of the slaughter of Sir Walter de Ogilvy, sheriff of Angus and others. The principal family of the name was established in the earldom of Mar, Aberdeenshire, by a Crown charter in 1433, of the lands of Ochtercoull or Auchtercoul in favor of William Coutts, his brother Alexander, their cousin John, and his brother Alexander." [1]

Early History of the Cockutay family

Although Medieval Scotland lacked a basic set of spelling rules, which meant that scribes recorded names according to their sounds it was not uncommon for the names of a father and son to be recorded differently. As a result, there are many spelling variations of Scottish single names. Cockutay has been written Coutts, Couts, Coots, Cootes, Coutt, Cout, Coot, Coote and many more.

Notable amongst the Clan at this time was John Coutts (1699-1750), a British merchant and banker, Lord Provost of Edinburgh in 1742. He was the "eldest son of Patrick Coutts, a tradesman in Edinburgh, and formerly of Montrose, by his wife, Christina Smith, was born on 28 July 1699. He entered into business as commission agent and dealer in grain, and rapidly acquiring capital became a negotiator of bills, a business which the banks...
Another 73 words (5 lines of text) are included under the topic Early Cockutay Notables in all our PDF Extended History products and printed products wherever possible.

Migration of the Cockutay family

Thousands of Scots left their home country to travel to Ireland or Australia, or to cross the Atlantic for the North American colonies. The difficult crossing was an enormous hurdle, but those who survived found freedom and opportunity in ample measure. Some Scots even fought for their freedom in the American War of Independence. This century, their ancestors have become aware of the illustrious history of the Scots in North America and at home through Clan societies and other organizations. Passenger and immigration lists show many early and influential immigrants bearing the name Cockutay: John Coutts who settled in Philadelphia, Pennsylvania in 1839; C.F. Coutes settled in San Francisco Cal. in 1851; John Cootes settled in Virginia in 1648..